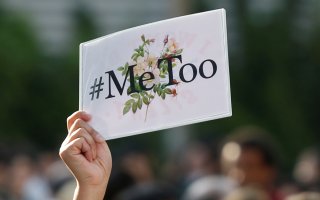 “The nurse at the clinic said, ‘he did not mean it.’ He drugged my drink. How could he not ‘mean it?’ My grades plummeted. I quit college. I lost my dignity. I lost me.”

That statement is just one among the thousands of tweets with the hashtag #WhyIDidntReport. The hashtag went viral in 2018 after President Trump questioned why Christine Blasey Ford didn’t report the sexual assault she alleged against then-Supreme Court nominee Brett Kavanaugh.

I analyzed these tweets for a research project about obstacles that sexual assault survivors face when reporting what happened. Those obstacles include skeptical outsiders, an intimidating legal system and the trauma of having to talk about the abuse again with investigators.

New Title IX guidelines that govern how sexual assault and harassment allegations are handled on college campuses take effect Aug. 14. Title IX is a civil rights law that prohibits discrimination on the basis of sex in education programs or activities that rely on federal financial assistance.

As a domestic violence scholar who has studied how victims are often blamed for their abuse, become confused about it and become hesitant to report assault for fear of making things worse, I believe these new guidelines will make reporting more difficult by increasing the burden for victims and narrowing what counts as assault.

Scope of the problem

Sexual assault is one of the most prevalent crimes on college campuses. As many as 1 in 5 college women and 1 in 20 men report being victimized by attempted or perpetrated assault during their time on campus. The combination of binge drinking, immaturity and loose legal guidelines for on-campus assault create a dangerous culture where abuse can fester.

Although false accusations of assault exist and can be damaging, they are rare – consisting of only 2%-5% of claims.

Universities have a troubled track record when it comes to recognizing and addressing sexual assaults. Since only around 20%-30% of assaults among college-aged women are reported to the police, the vast majority of abuse incidents stay hidden.

The new Education Department changes are intended to protect students from false claims by requiring due process for the accused. Unfortunately, as a part of the government’s effort to “restore due process” in campus proceedings for sexual assault and harassment, I believe the new requirements go too far in burdening alleged victims.

The new changes are complex and listed in a 2,033-page document that may be hard for universities to implement consistently, or for a student to understand or challenge. For example, a new stipulation is that for a report to be investigated by the university, it must have happened on campus or as a part of an “educational program or activity.”

There is a lot of gray area in what this means, which creates potential hurdles for survivors.

On August 14, the same day the new changes took effect, the Department of Education announced a new website billed as a “one-stop resource” for information about the new changes.

Further, the investigative process now requires any complaint of misconduct to be brought before a live hearing. This involves cross-examination, including by attorneys. For those already shaken and traumatized, recounting an assault in front of a panel that may include the presence of their perpetrator, is daunting.

Currently a student makes a report that is confidentially handled through a victim advocate in the Title IX office, which investigates the account without the pressure of this kind of direct encounter of alleged victim and perpetrator.

The new guidelines narrow the definition of harassment. This means less severe forms of sexual misconduct – the ones that don’t include overt violent sexual assault – are more likely to be dismissed. The old definition of misconduct or harassment is “unwelcome conduct of a sexual nature.”

The new guidelines change this wording, so that only “unwelcome conduct on the basis of sex that is so severe, pervasive, and objectively offensive that it effectively denies a person equal access to the recipient’s education program or activity” qualifies for investigation.

For someone who has experienced or is still being subjected to sexual maltreatment, this is a much harder standard to prove.

When I analyzed tweets connected to the hashtag #WhyIDidntReport, I found many where survivors of sexual assault described intimidating cultural norms.

For instance, one stated: “It happened so often … I thought it was normal behavior and that we had to take it.” Survivors also reported indifference from different agencies. One, for example, stated: “The officer rolled his eyes at me when I tried to file a report … asked if I’d been drinking, said it was probably a misunderstanding, and sent me off to go talk it out with the person who raped me.”

I grouped these obstacles into two main groups.

The first group included external factors, such as cultural influences and legal entanglements. The second group referred to internal factors, including powerlessness, fear, self-blame and shame.

Survivors who wanted to report assault bumped up against powerful cultural hierarchies and gender norms.

As one female student recounted: “I was a student leader of a group he advised. He used his position to force me to come to his office daily, doors closed, for hours where he made sexual jokes and forced me into long, full-body hugs. I naively obeyed him – he was in authority … My girlfriends … met with the Dean … and reported his behavior. I was then summoned to the Dean’s office and told I would be expelled for NOT reporting him… Men protect men.”

Others also mentioned being cowed by those in authority, keeping silent, as one person mentioned, “because he was the only Professor between me and my degree.”

Some attempted to report, only to get ignored by law enforcement workers. “I walked to the police station after I gained consciousness,” one rape survivor said, “cold and wet from laying in a field for who knows how long, the desk cop basically told me regret was not grounds to file a report for rape.”

The experience of assault for those in my project was often so overwhelmingly negative that to risk further trauma by pursuing justice simply wasn’t viable. For example, many survivors tweeted that they felt powerless: “He was my professor. I reported it to a female teacher. Said no one would believe me. That (reporting) would ruin my life.”

Others expressed fear, as shared by one survivor of rape: “At 21 my Christian college told me to get an abortion, my church kicked me out. I’m 29 and he’s still stalking me. He’s still free while I live in a prison of fear.”

Other internal reactions included self-blame: “I was drunk … I wondered if it was my fault … I wondered what my college friends would think of me.”

And shame: “He was a friend at a date party … Our friends blamed me. I flew home from college. 18 yrs later I’m still ashamed.”

As these tweets show, reporting sexual assault and harassment is already hard enough. When survivors speak up, it is important for individuals and universities to listen.