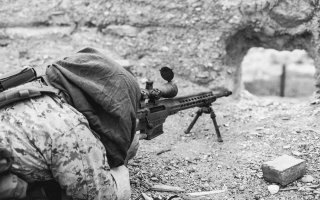 Next year the United States Army and Marine Corps will be fielding quite the rifle, the MRAD MK22 (Multi-Role Adaptive Design Mark 22). Produced by Tennessee-based Barrett Firearms Manufacturing, the rifle has met all requirements for the United States Department of Defense (DoD) contract for ASR (Advanced Sniper Rifle) in support of USSOCOM (U.S. Special Operations Command).

Instead of soldiers in the field utilizing multiple rifle platforms in various calibers for different missions, the MRAD will serve as a centralized platform that can adapt to what is needed. This modular, multi-caliber bolt action sniper rifle is capable of converting between .300 Norma Magnum, .338 Norma Magnum and 7.62x51 mm through a “full and open competition.”

This ability to change calibers will allow sniper teams to better conform to mission requirements or changes in the field without the need of intervention at the armorer level. This could also be a benefit in terms of maintenance and parts costs, as it will reduce the number of unique platforms fielded by sniper teams to just one that relies on interchangeable parts.

That’s a bit of a departure for the famed firearm company, which has produced large-caliber military-grade sniper rifles for nearly thirty years, since its founding, was awarded the contract in March 2019.

The MK22 has now completed all aspects of the Production Qualification Testing and Operational Testing phases. With this initial production order, deliveries of the new rifle will commence in January 2021.

“We are pleased to have reached this milestone with the project and look forward to providing our warfighters with this highly capable platform,” Joel Miller, director of Global Military Sales at Barrett Firearms said via a statement in November.

The MK22 is an updated version of the Barrett Multi-Role Adaptive Design (MRAD) sniper rifle, which the DoD selected as its Advanced Sniper Rifle in 2019. The MRADs have been in service with U.S. Navy SOCOM snipers, which adopted the rifle as part of a $50 million five-year contract with the Tenn.-based firearms maker.

According to the U.S. Marine Corps’ 2021 budget estimation sheet, the “ASR will replace all current bolt-action sniper rifles in the Marine Corps.” That will include the aging M40 platform, which has been in service with the Marines since 1966 and saw service throughout the Vietnam War. The M40 is currently in its sixth iteration, which was introduced in 2014, and was actually slated to be replaced the Mk13 Mod 7 it seems the Mk13 will be retired as well, the MilitaryTimes added.

The Army will retire its M2010 Enhanced Sniper Rifle as well as the Barrett-produced .50 caliber M107, which is notable as it was that rifle that put the company on the map in the 1980s!

The Army will now buy some 536 rifles for around $10.14 million, while the Marines will buy 250 rifles for $4 million next year. The numbers are likely to increase as the aging rifles are phased out.