This New U.S. Navy Missile Could Bring Non-Stealth Fighters Back Into Play 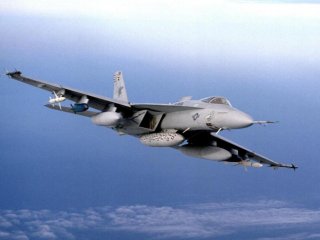 Earlier this week, the Navy announced that their new radar-hunting missile is officially moving into its first phase of low-rate production, and it could potentially make stealth a bit less essential for some portions of America’s fighter fleets.

This new weapon, dubbed the Advanced Anti-Radiation Guided Missile – Extended Range (AARGM-ER), is very similar to the Navy’s existing AARGM weapon system but incorporates a number of improvements with the stated aim of increasing both range and accuracy. The AARGM and new AARGM-ER are “anti-radiation” missiles, which means they’re designed to hunt down enemy radio emissions–particularly those produced by ground-based radar arrays.

This announcement comes after the Navy conducted its first successful live-fire test of the new missile last month at the Point Mugu Sea Range off the coast of southern California. The test took place three months earlier than initially anticipated, suggesting the weapon’s development is progressing better than expected.

The new missile will leverage a multi-mode guidance package that includes a GPS-assisted inertial navigation system and onboard sensors that can continue to track targets after they turn off their radar and even if they move locations while the missile is en route. In fact, the AARGM-ER can be fired before it even acquires its target, relying on other aircraft further ahead to provide targeting data.

According to the excellent coverage of this weapon system by Brett Tingley over at The Warzone, “The anti-radiation missile can also reportedly relay data in its final moments to confirm whether or not it successfully struck its intended target.”

The new missile can accommodate different sorts of warheads, leverages a new rocket motor, and is larger in diameter than its predecessors. It was designed to be carried inside the internal weapons bays of the Navy’s F-35Cs and uses software and some components from previous iterations to reduce development and production costs.

What do anti-radiation missiles do?

Put simply, anti-radiation missiles (of this sort) home in on the radar air defense systems use to detect and engage incoming aircraft, making these missiles a valuable weapon in the initial days of a conflict when America’s warfare doctrine calls for establishing air superiority. As radar arrays come online to detect incoming aircraft, those aircraft can fire high-speed anti-radiation missiles (HARM) like the AARGM to follow the radio waves back to their source and destroy it.

In fact, during the opening days of the first Gulf War, the U.S. sent unarmed drones into Iraqi airspace as bait to fool the enemy into powering up their air defense radar systems. Once the Iraqi radar came online, other U.S. aircraft deployed anti-radiation missiles to eliminate them, making Iraqi airspace much safer for continued air operations, as only the F-117 Nighthawk possessed stealth capabilities at the time.

Related: The ‘Stealth Fighter’ that wasn’t: Why we keep getting the F-117 wrong

While the Pentagon doesn’t offer up hard figures regarding the effective range of its existing AARGMs, the weapon’s designer, Orbital ATK, stated in 2017 that the Block I version in service can engage targets at distances greater than 60 miles (though some reports indicate a range that’s greater than 80 miles, but evidence to substantiate that figure isn’t readily available). At the time, the designs for the ER iteration of the weapon called for at least twice the range offered by the standard AARGM.

In the days before stealth became prevalent, using weapons like the AARGM to engage and destroy enemy air defenses was effectively the only way to limit the chances of aircraft being shot down by surface-to-air missiles. As such, part of America’s air warfare strategy has long included sending fighters out on patrols to look for and engage such defenses in missions sometimes referred to as “Wild Weasels.” Once the air defense systems in an area have been eliminated, the U.S. can send more aircraft in to bolster ground troops or engage other targets.

But air defense systems continue to mature and advance, outpacing the ranges offered by most anti-radiation missiles, making these radar-hunting missions too dangerous for fourth-generation aircraft like the Air Force’s newest F-15EXs in a neer-peer fight. Today, the plan is to use stealth fighters like the F-35 for these vital operations, as they stand the best chance at delaying or defeating detection for long enough to engage and destroy enemy radar arrays. Being able to carry the new AARGM-ER internally was one of the most significant requirements for this new weapon, as F-35s have previously carried the ARRGM externally. Carrying munitions on external hardpoints compromises the F-35’s stealth profile, making it easier to detect and target the fighter.

So loading F-35As and Cs (F-35Bs will be unable to carry the new weapon internally due to space limitations) with these new missiles will allow the U.S. to take out enemy air defenses from further distances and without compromising the F-35’s stealth, making this a significant development for the American military… but it could mean even more than that.

The challenges facing non-stealth aircraft in the 21st century

Earlier this year, Gen. Charles “CQ” Brown, Secretary of the Air Force, indicated that the branch is considering the development of a new, less advanced fighter to replace the F-16. The F-35 was initially adopted to serve as America’s new workhorse fighter, eventually replacing the nation’s massive fleet of nearly 1,300 Fighting Falcons along with a bevy of other aircraft, but repeated setbacks and budgetary overruns have hurt the F-35’s standing in that regard. Ongoing concerns about the jet’s operational costs may further limit the F-35’s use and the volume in which America buys them, in the future.

“I want to moderate how much we’re using those aircraft,” Air Force Chief of Staff Gen. Charles Q. Brown Jr. said of the F-35 in February.

The problem, critics point out, is that investing in a new non-stealth (or less-stealth) fighter seems like working in the wrong direction with air defense systems out of competitors like Russia and China becoming increasingly capable. Proponents of the fifth-generation-minus concept (or an aircraft that bridges the gap between non-stealth fourth-generation fighters and stealthy fifth-generation ones) often point out that many of America’s combat operations take place in the developing world, where air defenses aren’t an issue. Spending $44,000 per hour to fly a stealth aircraft in uncontested airspace just doesn’t seem logical when you could accomplish the same mission for less than half of that hourly cost in a non-stealth F-16.

Driving the argument that American aircraft need to be stealthy are concerns about the looming threat of China in the Pacific. The nation’s massive navy and aggressive policies in the South China Sea make the region a focus for America’s defense apparatus in the coming years, and many contend that any aircraft that lacks stealth capabilities will be short-lived in a high-end fight against a technologically capable opponent like China.

China’s advanced domestic medium-range air defense system, the HK-16, can detect incoming aircraft at ranges in excess of 86 miles and can track as many as 48 targets simultaneously. Russia’s most advanced air defense system, the S-400 Triumf, has been called the best in the world and has a claimed range of between 155 and 250 miles. With an operational range of arguably 60 to a bit more than 80 miles, American fighters would have no choice but to launch current radar-hunting AARGMs from within range of these air defense systems, making it a job only stealth jets could do.

While the range of the Navy’s new anti-radiation missiles has obviously not been disclosed, holding true to the Navy’s original requirements would suggest the AARGM-ER has a range of somewhere greater than 120 to 160 miles–well outside the detection radius of China’s HK-16 and flirting with the outside limits of Russia’s claims regarding the S-400’s furthest reaching surface-to-air missiles. In other words, it’s feasible that the AARGM-ER could engage even the most advanced air defense systems on the planet from too far out to be at risk of being shot down.

And that could put fourth-generation workhorses like the Navy’s F/A-18 Super Hornets right back into the fight, despite their lack of stealth.

This approach could be made even more effective through secure data links between forward advancing F-35s and less-stealthy jets following behind. There has already been a great deal of discussion about F-35s using fourth-generation fighters like the F-15EX as “missile trucks” or “flying magazines,” effectively carrying and launching weapons that are guided by the F-35’s onboard systems. A datalink connecting Block III Super Hornets to F-35Cs could likewise enable the stealth jets to fly deep into enemy airspace and relay target coordinates back to F/A-18s that are safely out of air defense range. To this very end, the Navy intends to arm F/A-18 Super Hornets and EA-18G Growlers with this weapon first, and the AARGM-ER is designed specifically to network with external sources for targeting data.