New Zealand is Making Banks Keep Track of Climate Change. The Rest of the World Should, Too 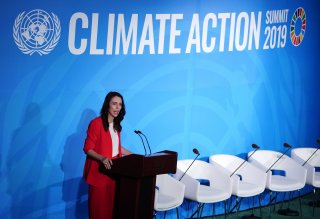 This week’s announcement of mandatory disclosures of climate-related risks for companies and financial institutions is arguably the New Zealand government’s most significant climate policy — even more so than the Zero Carbon Act itself.

The new policy will come into effect in 2023. It requires all banks, asset managers and insurance companies with more than NZ$1 billion in assets to disclose their climate risks, in line with the emerging global standard from the Task Force on Climate-related Financial Disclosures (TCFD). This is a smart move, as it ties risk disclosure to international best practice, which is likely to evolve in the coming years.

There will be a collective gulp in bank boards and company risk management departments of the roughly 200 affected entities, but initiatives such as the Aotearoa Circle Sustainable Finance Forum show a growing proportion of the financial sector understands climate risk disclosures are necessary.

I have criticised this government’s climate policy in the past for being big on promise but short on concrete policies. But this financial disclosure policy has some real teeth.

Banking on a Brighter Future

New Zealand has a bank-based financial system. This means banks — rather than the stock or bond markets — are the primary source of finance for companies.

New Zealand’s Exchange (NZX) has a market capitalisation of around NZ$170 billion, while the four big New Zealand banks (all subsidiaries of Australian banks) have assets, consisting largely of loans, of around NZ$500 billion.

Including banks and insurance companies in the new mandatory disclosure rules means the whole of the economy will be seen through a climate risk lens, not just large companies listed on the stock market.

Banks will need to think seriously about transition, physical and liability risk when lending and offering insurance to households and small and medium size enterprises (SMEs). This matters most to domestic real estate, by far the largest item on the balance sheet of New Zealand banks, and agricultural and small businesses more generally.

It would be unreasonable to ask SMEs and households to disclose climate risks, so the task is being delegated to banks and insurers.

Figuring out what climate risks lie within banks is not a simple task. Banks will need to scale up their ability to estimate flooding risk from extreme rain, storms and sea level rise on residential housing.

New Zealand’s emissions profile is dominated by agricultural emissions. Banks will need to evaluate whether future loan applications for dairy intensification are consistent with the Paris Agreement, or if those farm loans might become stranded assets through future regulatory changes, such as the eventual entry of agriculture into New Zealand’s Emissions Trading Scheme.

The policy could cause some interesting spillover effects for other countries. Around 20% of ANZ Banking Group assets are from its ANZ New Zealand subsidiary. Might this force greater disclosure by the Australian parent? Or will banks try to wriggle out of New Zealand’s disclosure requirements through “foreign exempt issuers status”?

The latter seems improbable, since the policy explicitly mentions banks with more than NZ$1 billion in assets. This threshold could cover 13 banks registered in New Zealand. It will be interesting to see how large international banks such as the Bank of China, which has a “small” presence in New Zealand, will respond.

The policy will also mean the half of NZX-listed companies currently not disclosing greenhouse gas emissions will have to do so. Our recent study reveals substantial climate transition risks for a number of listed companies.

Our research shows it is generally smaller and less profitable firms that do not disclose.

Having all listed firms disclose will level the playing field. Importantly, it will allow investment managers (who also need to disclose their climate risks) to overcome past issues of insufficient data to create genuinely climate-friendly investment products.

The task of independent monitoring, reporting and enforcement of the rules will fall to the financial regulator, the Financial Markets Authority.

Reporting by the 200 or so affected entities will be on a “report or explain basis”. But companies with significant risks that choose the explain option will be disciplined by the market and potentially by the authority.

Disclosure will increase and companies, investment managers, insurers and banks will be comparable on a like-for-like basis — finally allowing consumers to make fully informed decisions about where their money goes. These new rules will unleash the market and drive it in a more climate-friendly direction — beginning the long process of delivering a genuinely sustainable financial system.