Niger's Terrorism Problem Is Getting Worse 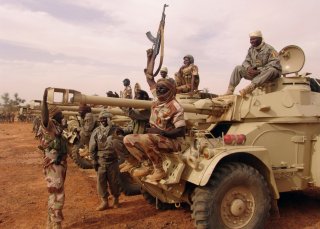 Here’s What You Need to Remember: So far, around 530 civilians in Niger have died from Islamist activity, according to the Armed Conflict Location and Event Data Project (ACLED).

At least sixty-nine Nigerien citizens have been killed in an attack by Islamist militants in southwestern Niger, near the village of Adab-Dab, according to an official government statement.

Although the dead were not identified, they included a town mayor, according to the statement. According to AFP, the victims were members of a self-defense militia that opposes jihadist activity in the region. Such activity is primarily led by the “Islamic State in the Greater Sahara” (ISGS), ISIS’s regional affiliate branch, which the self-defense militia accused of ambushing the men on motorcycles. Local sources identified the mayor as leading the nearby town of Banibangou; it also reported that fifteen members of the militia had escaped the attack, and a Nigerien government official stated that a search and rescue operation was underway to look for the assailants.

The violence took place in Niger’s “tri-border” region, which it shares with Mali and Burkina Faso, two other West African nations that have grappled with a transnational Islamist insurgency over the past decade.

The insurgency in the Sahel was largely precipitated by a 2012 coup in Mali, overthrowing the government and resulting in the northern half of the country seceding. That proto-state, Azawad, quickly fell under the sway of Islamist groups with weapons obtained from overthrown Libyan leader Muammar Gaddafi’s arsenals.

Although the French military intervened in 2014 to combat the insurgency, it spread across the Sahel, aided by the ineffective responses of the region’s weak states.

So far, around 530 civilians in Niger have died from Islamist activity, according to the Armed Conflict Location and Event Data Project (ACLED). This number is more than five times the number killed in 2020, marking a sharp escalation in insurgency operations.

The Nigerien government declared Friday and Saturday two national days of mourning for the victims of the attack.