No, Biden Is Not Embracing ‘Open Borders’ 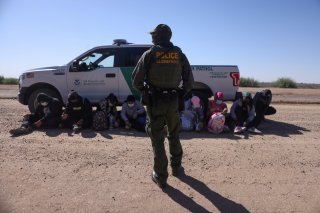 Key Point: Ultimately, Biden has made a policy choice to let in as few immigrants as possible. He’s not simply “enforcing the law.” He’s finding every way possible to keep out immigrants. Yet despite this fact, he’s still facing the same tired claims that he’s for “open borders.”

Practically since his first week in office, President Joe Biden has faced repeated criticisms from Republicans and some Democrats that his border policy amounts to “open borders.” This criticism is not simply inaccurate: it is unhinged from reality in a way that distinguishes itself from normal political hyperbole. Indeed, U.S. immigration policy is effectively closed borders, and Biden’s immigration policies and goals are largely the same as those of President Donald Trump.

Under U.S. immigration law, it is illegal for anyone in the world to travel or immigrate to the United States unless they fall into very narrow exceptions. Like Alcohol Prohibition—which had exemptions for religious, medicinal, or industrial purposes—America’s immigration prohibition’s small exceptions are irrelevant for the vast majority of potential immigrants. Effectively, if they don’t qualify as a select few high skilled workers or family members of U.S. citizens, they can’t come legally.

For example, one exception is for those facing persecution in their home countries. Biden has undisputed authority under the law to admit as many refugees from abroad as he wants. The president sets the limit and picks whoever he considers “of concern” to the United States. Yet Biden is on pace to admit the fewest refugees in the history of the U.S. refugee program, fewer than 10,000.

He won’t let refugees in from abroad. But the law explicitly allows refugees to ask for asylum at U.S. borders even if they don’t have permission: anyone “who arrives in the United States (whether or not at a designated port of arrival . . . ), irrespective of [their legal] status, may apply for asylum.” In 1996, Congress clarified that agents “shall refer [any asylum seeker] for an interview by an asylum officer.”

Yet Biden won’t follow that either. He has continued a Trump ban on “nonessential travel” at U.S. land ports of entry and requesting asylum isn’t essential. So because they can’t come in legally, they cross illegally, and since the law says they can apply “whether or not at a designated port of entry, irrespective of their legal status,” they should still have the right to request asylum.

But Biden is using another Trump policy known as “Title 42 expulsion” to immediately deport as many asylum seekers and border crossers as possible without hearing their asylum claims. He's mostly dumping them in Mexico, just as Trump did with "Remain in Mexico," just with a different name and on a much larger scale. Biden's still using the pandemic as a reason for this policy, despite the easy availability of effective vaccines for Americans who want them. But whatever the excuse, his goal is the same as Trump: immediately deport as many as he possibly can.

So what explains the reports of some immigrants being released into the United States? Is this “open borders”? Not at all. The numbers of arrivals so far exceed the government’s capacity to turn them away that it has resorted to releasing a few of them as a last resort, but they are not “free.” They are arrested, detained, and charged as removable. They are illegal immigrants subject to re-arrest at any time.

The Biden administration has smashed all records for immediate expulsions without due process, increasing the rate from 62,000 per month under Trump to about 100,000, but Mexico will only take back its own citizens, Guatemalans, Hondurans, and Salvadorans, and even for the Central Americans, it will not take back young kids with their parents if it has no place for them to stay (how logical!).

So everyone else must be put on planes and flown back, but this takes far more time and resources than the government has. Immigrants must be detained, checked over much more thoroughly, and shipped to airports. There aren’t enough detention facilities, agents, and airplanes to get this job done in enough time to avoid having to release some immigrants. The Biden administration has repeatedly said as much.

Don’t believe them? Well, the Trump administration faced the exact same constraints, and they too released many thousands of immigrants from the border. But Biden has a much greater challenge now to keep up his closed border policies. The number of immigrants arriving from outside Mexico and Central America has exploded in the last few months, increasing from about 10,000 to more than 62,000 per month, requiring farther flights and more resources. Yet despite the releases, the number of removals or those sent to immigration jail far outnumber the number of releases about 3 to 1.

The illegal immigration problem would disappear if President Biden would simply let immigrants enter the country legally at ports of entry to request asylum, grant them work visas at consulates, or admit them from abroad under the refugee program or through “humanitarian parole”—a discretionary legal immigration authority that he has chosen only to deploy sparingly, mainly for Afghans. Yet Biden is keeping consulates closed and wasting more than 42,000 H-2B seasonal work visas that Congress authorized him to issue.

Ultimately, Biden has made a policy choice to let in as few immigrants as possible. He’s not simply “enforcing the law.” He’s finding every way possible to keep out immigrants. Yet despite this fact, he’s still facing the same tired claims that he’s for “open borders.” If he’s going to get that claim regardless, he should just own it. Open America’s doors, and let immigrants come legally.