No Going Back: Special Ops Love the Army’s M4 and M249 Replacements 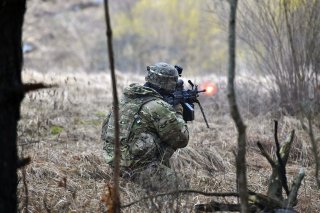 Here's What You Need to Remember: Despite the radical new ammunition designs, the program seems to be a hit.

The Army’s Next Generation Squad Weapon program will replace both the M4 and the M249 with new rifles—and a new round. Here’s why special operations love it.

As I previously wrote, the NGSW program aims to replace both the M4 carbine and the M249 SAW platforms with two new weapons. Sig Sauer, General Dynamics, and Textron Systems submitted designs that include magazine and belt-fed designs.

According to the Army, the NGSW program aims to make individual soldiers deadlier at greater ranges. “The NGSW program significantly increases lethality and probability of hit at the squad level.” The M4 and M249 replacements will use a new type of ammunition as well, replacing the venerable 5.56 mm and 7.62 mm NATO standards. The Army hopes their new projectile will be superior. “Due to the nature of the General Purpose ammunition, the 6.8mm projectile will outperform even the most modern 5.56mm and 7.62mm ammunition. These weapons will give Soldiers significant capability improvements in accuracy, range, signature management, and lethality.”

Significantly, the 6.8 mm intermediate round won’t be like traditional brass-cased ammunition. The three companies in the NGSW program use different ammunition cases, including a plastic composite case, a hybrid brass-steel case, and a plastic telescoped cartridge. These exotic-looking cases are an attempt at weight savings, despite using a heavier round, to allow individual soldiers to carry more ammunition without having to hump around extra pounds.

The more modest of the designs, a brass-steel hybrid round might be the most promising. The cartridge case is mated to a steel base with an aluminum washer that the manufacturer, Sig, says shaves off 20% of cartridge weight. The base is subjected to a lot of stress during firing, and a steel base could provide a good combination of lightweight and durability.

General Dynamic’s case is likely even lighter thanks to doing away with brass entirely, opting for an almost-entirely plastic case. A small band of metal along the case rim probably adds additional strength. Plastic cases might not be a strong as traditional brass though.

Textron Systems’ telescoped cartridge is perhaps the most ambitious, and complicated. Textron’s design buries the 6.8 mm bullet inside the case (which is also made of plastic), for a shorter overall case length. Like the General Dynamics’ case, polymer ammunition may not perform as well under prolonged firing.

Despite the radical new ammunition designs, the program seems to be a hit. According to reporting by military.com, the Army expects to choose one of the three entrants early in 2022 and fielding the winning design sometime afterward.