No More Top Gun? A Computer Could Fly the Fighter Jets During America's Next War 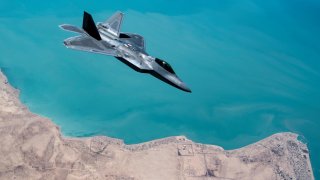 Here's What You Need To Remember: Dogfights are all about reaction times, and computers have human pilots beat.

Can a computer pilot defeat a human pilot in a dogfight?

DARPA seems to think so. It wants to turn human fighter pilots into drone managers, while artificial intelligence, or AI, handles the details of air combat.

The Pentagon’s pet research agency has created the aptly titled ACE (Air Combat Evolution) project to develop artificial intelligence that lets the drones do the dogfighting while the human pilot controls the drones.

DARPA notes that while dogfighting is chaotic, it does have “a clearly defined objective, measurable outcome, and the inherent physical limitations of aircraft dynamics, making them a good test case for advanced tactical automation.” In other words, the laws of physics and aerodynamics are consistent enough that a computer should be to handle much of the flying.

It's part of an emerging future of aerial warfare where a human pilot in a manned aircraft teams up with swarms of combat drones, with the pilot giving basic instructions to the swarm AI, which will handle the details. Lurking in the background is the fact that machines can react far faster than humans.

Yet some fighter jocks may not be happy with DARPA’s view of dogfighting as a novelty that can be performed by a computer. “Turning aerial dogfighting over to AI is less about dogfighting, which should be rare in the future, and more about giving pilots the confidence that AI and automation can handle a high-end fight,” DARPA said. As soon as new human fighter pilots learn to take-off, navigate, and land, they are taught aerial combat maneuvers. Contrary to popular belief, new fighter pilots learn to dogfight because it represents a crucible where pilot performance and trust can be refined. To accelerate the transformation of pilots from aircraft operators to mission battle commanders — who can entrust dynamic air combat tasks to unmanned, semi-autonomous airborne assets from the cockpit — the AI must first prove it can handle the basics.”

The belief is that World War II-style dogfights are a thing of the past. The future of air combat may be long-range air-to-air missile duels, or melees between swarms of combat drones controlled by a few human-piloted aircraft. Then again, the U.S. military of the 1950s thought dogfighting was obsolete, only to painfully discover the opposite was true over Vietnam.

U.S. pilots eventually relearned how to dogfight through programs like Top Gun. One question will be how adaptable an air combat AI proves to be. It’s when the unexpected happens, or that flash of intuition is needed, that machine may yet meet its match in man.

Image: A U.S. F-22 Raptor, based out of Al Udeid Base in Doha, Qatar, receives fuel from a 28th Expeditionary Air Refuelling Squadron KC-135 Stratotanker during a combat air patrol mission over an undisclosed location in Southwest Asia, in this picture taken September 13, 2019 and released by U.S Air Force on September 18, 2019. Russ Scalf/U.S. Air Force/Handout.