No, Russian Aggression in the Baltics Will Not Be a Repeat of Crimea 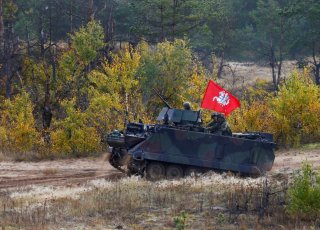 Here's What You Need to Remember: The Baltics' actual vulnerability compared to Crimea is more nuanced. Unlike the 60 percent Russian-speaking majority in Crimea, it is extremely unlikely that Russian speakers in the Baltics would be inclined to sympathize with Moscow, nor that their national governments would hold a referendum on whether to become part of Russia, like the local government in Crimea did.

In 2014, Russia invaded and annexed Ukraine’s Crimean Peninsula in the largest land seizure in Europe since World War II. Since then, experts have made various predictions of what Moscow’s next target for expansion might be.

And there is no shortage of potential next targets in the region. Since Crimea was annexed, Russia has occupied part of eastern Ukraine, engaging in skirmishes with domestic insurgents.

Over the last several months, there was a rapid buildup of Russian troops in the Donbas region of Ukraine, followed by a rapid withdrawal once the alarm raised by NATO and the criticism from the international community became more vocal. (However, about 80,000 Russian troops remain in those areas).

Likewise, Moscow seized on the institutional vacuum left in Belarus after 2020's wave of protest attempting to oust authoritarian President Alyaksandr Lukashenka, who quickly converted himself into a closer Putin ally than he was before the protests erupted. This “soft takeover” in Minsk has allowed Russia to move tanks and troops to Belarus’ border with Poland.

The Baltic states—Estonia, Latvia, and Lithuania—have been one of the most commonly identified future hot spots and a particularly disastrous area for conflict to break out. Once Russian satellites like most countries in the area, they are often seen as the next most likely targets for Russian aggression. Because of their NATO membership, unlike with Ukraine and Belarus, military action there would automatically draw in the rest of the alliance.

One of Moscow’s main justifications for annexing Crimea was on the basis of reuniting Russia with Crimea’s ethnic Russian majority. In 2014, that population was about 60 percent. Each of the Baltic states has a Russian-speaking minority population, but that number is 25 percent in Latvia and Estonia. These numbers, combined with the small size of each country and their shared Soviet history, have made the Baltics seemingly vulnerable to becoming the next Crimea.  They are also at a geographic disadvantage due to their small sizes and close proximity to the heavily-armed Russian oblast of Kaliningrad.

However, their actual vulnerability compared to Crimea is more nuanced. Unlike the 60 percent Russian-speaking majority in Crimea, it is extremely unlikely that Russian speakers in the Baltics would be inclined to sympathize with Moscow, nor that their national governments would hold a referendum on whether to become part of Russia, like the local government in Crimea did.

As was the case in Belarus before this year, Russian influence in the civil societies of Latvia, Lithuania, and Estonia is limited. But unlike Belarus, the Baltics have had concrete institutional divisions from Russia for almost two decades; besides being NATO members, all three countries have been members of the European Union since 2004 and are committed liberal democracies. Likewise, Estonians closely identify with their Nordic neighbors, while Latvians and Lithuanians view themselves as Eastern European—but not Russian.

On the one hand, because of the strength of Baltic institutions, using hard power over covert political destabilization is likely Moscow’s path of least resistance there. There is already a heightened level of preparedness for a sudden invasion; as a measure of deterrence, security forces in Estonia and Latvia are already trained to attack Russian troops on sight. Those forces are supported by NATO’s Baltic Air Policing (BAP) mission, where fighters are deployed on a rotating basis by country at Estonia’s Amari Air Base and Lithuania’s Šiauliai Air Base.

On the other hand, it should not be assumed that Russia’s hard-power annexation of Crimea is the new playbook for its future expansion elsewhere. Russian aggression in the Baltics is likely to look different from Crimea because of the risk that comes with attacking NATO members. Russia would have to ensure that their attack is successful and that their forces are prepared to overwhelm the inevitable response from the rest of the alliance.

In any case, it is Moscow’s soft-power strategy that remains more unpredictable. If it fails to influence civil society in the Baltics or undermine its national governments, it is just as likely to deploy other covert methods that have not been observed before.

However, Russian aggression toward the Baltics plays out, if it plays out, the U.S. and NATO should not take the security measures in place there for granted. Potential vulnerability in the Baltics is a good enough reason to fortify NATO defenses, especially on the Polish border, and to increase the support given to deterrence measures by Baltic security forces.

So far, a military response from NATO has been off the table due to both sides’ nuclear arsenals. As a result, NATO has had few options in terms of a response apart from sanctions regimes. Despite how much economic damage might have been done to Russia, they never seem to be successful in deterring Moscow’s future explorations of how far it can expand its sphere of influence.And while sanctions are the only option, they backfire. Russian President Vladimir Putin has used sanctions imposed by the West as a rhetorical device to bolster his own position and agenda for Russia at home. Sanctions are framed as evidence that the U.S. and Europe are trying to stifle Russia’s recovery from the fall of the Soviet Union, likewise characterized by Putin as a national humiliation from which the West benefitted enormously.

On the military front, sanctions have also not achieved the desired result. Indeed, despite a struggling economy, Russia’s military has only grown stronger and more sophisticated since 2014, as have its attempts to undermine the West and Western-style democracies.

Ultimately, Russia’s increasing military sophistication means that the U.S. and NATO should now be prepared to modernize proportionally to help defend the Baltic states and treat the potential for the eruption of conflict in the Baltics as a threat in the near term. Fortunately, NATO has modernized its defenses in Northern and Eastern Europe, with the F-35 fighter supplementing or replacing older fleets in several countries, including two of the Baltics’ Nordic neighbors, Norway and Denmark, along with Poland. In Poland, one of NATO’s “frontline” states due to its proximity to Russia, the F-35 is in especially urgent demand. The F-35 is especially important in deterring Russian aggression because not only does it collect more intelligence than other tactical aircraft, it is invisible to Russian radar.

Poland has also purchased Patriot missiles from the U.S., which it will be receiving within the next few years, and neighboring Romania has received them as well. Poland is currently in discussions to acquire the M1 Abrams tank, also produced by the United States; if successful, it would be the first European country to do so. The M1 Abrams would both replace Poland’s 500 Soviet-made tanks and eliminate its problem of not being able to join France and Germany’s Main Battle Tank coalition.

Though none of the three Baltic states has acquired the F-35, it was recently deployed there for the first time when four Italian F-35s arrived at Estonia’s Amari Air Base to take over the BAP mission from Germany in April. Despite the readiness of Baltic security forces, BAP is the closest thing that the three countries have to an air defense system, but it has been criticized as insufficiently able to respond to simulated Russian air attacks. Therefore, the development of a domestic air defense system in Latvia, Lithuania, or Estonia, if not the outright sale of the F-35 to one of them, would be more reason to make Russia think twice before launching a conventional attack.