No Way to Die: How a U.S. Submarine Split Into Six Pieces and Was Lost in 1963 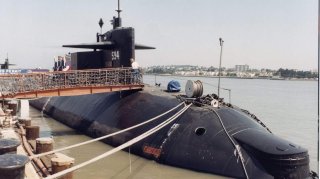 Here's What You Need To Remember: The USS Thresher accident led to some serious changes in submarine safety.

Image:  The Thresher/Permit-class submarine USS Permit (SSN-594) is shown at Mare Island Naval Shipyard on the date of her decommission on 22 Jul 91. U.S. Navy.