North Korea’s New ICBM Is a Serious Piece of Hardware 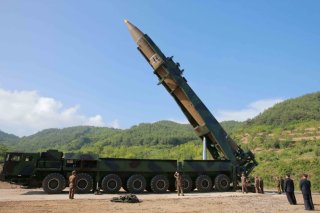 In a midnight military parade to celebrate the 75th anniversary of the country’s rule under the despotic Kim family, North Korea revealed a new monster intercontinental ballistic missile—perhaps one of the world’s largest—on the back of an equally large transporter-erector-launcher vehicle. The new ICBM has nuclear-weapons analysts and North Korea watchers guessing at the missile’s capability and, more broadly, considering what it means for US – North Korea relations, with either a second Donald Trump administration or a Joe Biden White House.

Trump may think that he and Kim Jong-un ‘fell in love’, but Kim has made it clear that the love is unrequited. Trump has been used. Most North Korea watchers predicted that nothing would come of Washington’s efforts to convince Pyongyang to accept comprehensive and verifiable nuclear disarmament. As expected, it’s back to square one.

North Korea’s new big stick is large—much bigger than the Hwasong-15 tested in 2017. It would potentially have sufficient throw-weight for multiple warheads, or a large, high-yield warhead and lots of penetration aids. It could hold at risk a range of targets across the continental United States, most likely large urban areas.

Either loadout would make it more difficult for US missile-defence systems in Alaska to counter this missile. It would be far more expensive for the US to add more interceptors than it would be for North Korea to simply build more of these large ICBMs and place more warheads on each of them. The cost–benefit advantage is definitely with Pyongyang, and this missile highlights the weakness of current interceptor-based missile-defence systems.

Such a large missile can’t be developed quickly, and its existence was alluded to by Kim back in January when he referred to a ‘new strategic weapon’. It was thought that it would be either a solid-fuelled road-mobile ICBM or a ballistic missile submarine. It seems highly unlikely that the missile is a fake; a mock-up could be quickly detected by the US intelligence community and would be counterproductive for the Kim regime’s credibility.

Alongside the new ICBM, the North Koreans showed the Pukguksong-4, which is based on the Pukguksong-3 submarine-launched ballistic missile. It could be an enhanced solid-fuelled SLBM, likely to be incorporated into a ‘Sinpo-C’ conventionally powered ballistic missile submarine as the basis for a second-strike capability, at least against a regional target such as Guam. Or, perhaps more worryingly, it could be a road-mobile solid-fuelled ICBM, which would be harder to monitor and disrupt before launch. That possibility was reinforced by the fact that the missile was displayed with a Korean People’s Army crew alongside. Also displayed were more advanced, solid-fuelled, road-mobile short- and medium-range missiles and battlefield rockets that extend North Korea’s ability to strike at targets deeper into South Korea.

These new missile capabilities will undermine any claims by Trump that his efforts towards summit diplomacy with Kim have been successful. If Washington doubles down on such diplomacy, the only outcome would be North Korean demands for concessions from the US. These would probably include a peace treaty designed to make the withdrawal of US forces from the Korean peninsula inevitable; the lifting of already weakened economic sanctions; and perhaps a pull-back of US nuclear-capable forces from the region. North Korea will give little in return, and certainly, with this missile being paraded about, denuclearisation isn’t likely to be on Kim’s agenda for any future summit. There would be little to gain from holding such a discussion when it’s clear North Korea is prioritising a nuclear weapons build-up.

At some point, Kim may decide to test the new missile, which would give him a new lever in any negotiations and, if the tests were successful, would add credibility to North Korea’s ICBM capability and cause a new round of tension with the US. Would a second Trump administration return to ‘fire and fury’, noting how close the crisis of 2017 came to war? Or, if Biden wins, might Kim decide to test the new administration by launching his new ICBM—perhaps over Japan?

A Biden White House will likely to focus on reinforcing and restoring confidence in US alliance structures, particularly with Japan and South Korea. Washington’s alliance with Seoul was seriously damaged by Trump’s efforts to extract greater financial payment for the hosting of US forces in South Korea and his constant suggestions that they could be withdrawn.

Biden should also reinforce development of prompt-strike ‘left of launch’ options for the US to counter the threat of road-mobile ballistic missiles. The development of effective space-based surveillance and long-endurance unmanned aerial vehicles operating in ‘near space’ would enable the monitoring of North Korean road-mobile ICBMs and the ability to strike them while they’re being fuelled prior to launch. This could be done with hypersonic non-nuclear precision weapons and would strengthen deterrence by denial.

Of course, these developments can’t be viewed in isolation from the broader US–China strategic competition. Beijing ultimately wants US forces out of northeast Asia, and getting US forces off the Korean peninsula would be a first step in that process, a goal that naturally aligns with Kim’s interests. A Kim who could use his more capable nuclear weapons to provide leverage to act in ways Beijing doesn’t control wouldn’t be good news for Chinese leader Xi Jinping, however.

A Biden administration’s diplomatic approach to North Korea may be to restart a multilateral process, akin to the six-party talks, which China could then exploit to achieve its own objectives. If he becomes president, Biden will need to be wary of being played for a sucker by both Beijing and Pyongyang in the same way that Kim played Trump.