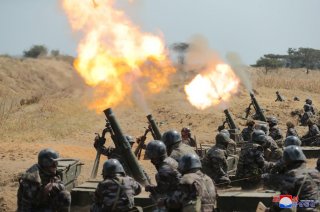 Here's What You Need To Remember: While the North Korea once nearly conquered the South in just a few weeks, today it’s that its military has no hope of defeating its much wealthier and more populous southern neighbor—let alone do so while fighting off U.S. forces. Instead, Pyongyang has built up its capabilities to make a renewed conflict as unacceptably costly to the citizens of its adversaries as possible.