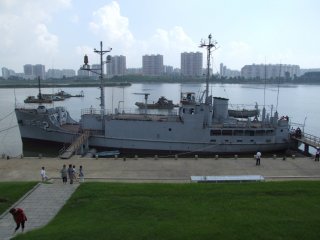 Here's What You Need To Remember: Although Pyongyang profited from playing one patron against the other, its attack on the Pueblo was probably primarily motivated by the failure of its assassination plot in South Korea. Anticipating possible attacks from South Korea or the United, it may have seen taking the Pueblo as a preemptive move in an imminent conflict, or as a means to gain leverage over Washington and sow dissension between the United States and South Korea.

Today signals intelligence remains a common form of espionage—and a basically legal one, so long as the ships involved do not stray into territorial waters and aircraft stick to international airspace. Recently, the Russian spy ship Viktor Leonov was observed thirty miles off the U.S. East Coast. U.S. Air Force RC-135 Rivet Joint aircraft routinely intercept signal traffic from North Korea and other nations. However, these electronic spies can only operate so long as the nations they are spying on respect the norms of international law—a risky proposition when tensions are high and the nation in question is governed by a capricious regime.

The subchaser’s captain was not satisfied, and continued to close on the Pueblo. Soon afterward, two North Korean MiG-21 fighters swooped low over the 890-ton spy ship, and three P-4 torpedo boats joined the subchaser to surround the American vessel. Bucher turned the ponderous Pueblo around and made full speed eastward, managing to worm his ship away from a torpedo boat that attempted to land a boarding party toting AK-47s. The North Korean boats began raking the Pueblo with heavy machine-gun fire and blasting at it with the fifty-seven-millimeter cannon on the subchaser. Shrapnel sprayed across the bridge, wounding Bucher.

The North Korean attack came at the worst possible moment. Seoul feared renewed attacks across the demilitarized zone and threatened to withdraw South Korean troops from Vietnam. The war in Vietnam was heating up, as North Vietnamese forces embarked on a series of preliminary attacks culminating in the epic Tet Offensive. A CIA A-12 spy plane from Project Blackshield located the Pueblo in Wonsan harbor on January 28. CIA director Richard Helms thought the North Koreans had launched the attack as part of a Soviet plot to relieve pressure on Vietnam.

Pyongyang, for its part, trumpeted its capture of the Pueblo, which it falsely claimed had intruded in North Korean waters. (North Korea defines “international waters” as beginning fifty nautical miles, rather than twelve, from its shores.) In time, North Korea began issuing photos of the captured American crew and a signed confession from Captain Bucher, causing the CIA to assemble a psychological profile of the Pueblo’s commander in an attempt to gauge his loyalty. The crew’s plight evoked an outpouring of sympathy in the United States and even inspired a Star Trek episode.