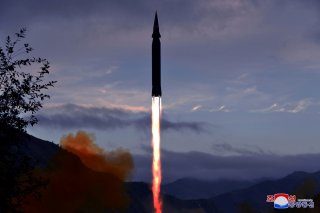 Here's What You Need to Know: The purported test would make North Korea one of four other countries—namely, China, Russia, India, and the United States—to be actively engaged in hypersonic weapons projects.

North Korea announced in September that it launched a hypersonic missile, potentially putting the Hermit Kingdom a hair’s breadth from fielding one of the world’s most advanced categories of strike weapons.

The missile’s specifications remain unclear. Analysts say that the single photo accompanying the tests suggests, but does not conclusively show, the Hwasong-8 to be a hypersonic boost-glide vehicle (HGV) system. HGVs are one of two primary categories of hypersonic missiles, the other being hypersonic cruise missiles. HGVs are launched from a regular rocket booster before separating to glide toward their target. Experts believe that the sheer speed of these weapons and their unpredictable flight path makes them exceedingly difficult to intercept.

North Korea’s hypersonic ambitions have been years in the making. “The push to develop a hypersonic glider isn't all too surprising given that Kim Jong-un had indicated this back in January,” said defense analyst Ankit Panda.

While the Hwasong-8 took the major headlines on Wednesday, the KCNA report revealed another, potentially no less consequential, “bombshell.” The report noted that the test “ascertained the stability of the engine as well as of missile fuel ampoule that has been introduced for the first time,” suggesting that the DPRK has attained the ability to fuel its missiles in the factory rather than after being deployed in the field. “If the DPRK fuels the missiles in the factory, military units don't have to spend time doing it in the field when the US Air Force is doing its level best to kill them. . . . Big step for the DPRK,” Middlebury Institute of International Studies professor Jeffrey Lewis said in a social media post on Twitter.

Experts have interpreted the test as an ominous development for Seoul and Tokyo. “If true, it means current South Korean and Japanese missile defense systems become close to impotent,” Lionel Fatton, an assistant professor at Webster University in Switzerland and researcher at Meiji University in Japan, told CNN. Others were less quick to jump to conclusions. “One flight test is far from enough to successfully develop this kind of technology,” Principal Deputy Assistant Secretary of State for International Security and Nonproliferation Vann Van Diepen said. “For them, lauding the technical achievement this represents is a big part of what’s going on—at least at this stage.”

It remains unclear whether the Hwasong-8 missile is being fully sourced through domestic expertise and supply chains or if the DPRK is benefitting from foreign technology transfers in the realm of hypersonics.

The test was reportedly deemed a failure by a South Korean intelligence assessment that concluded the Hwasong-8 did not exceed Mach 2.5, allegedly falling well short of the Mach 5 threshold for hypersonic speed. South Korea’s joint chiefs of staff said in a press statement that the missile remains in an early development stage and is still a ways off from entering service in the DPRK military. The statement added that the missile can be intercepted by current U.S. and South Korean missile defenses.