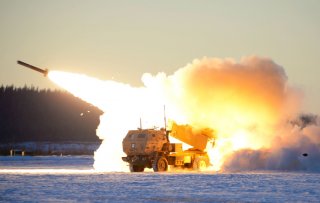 Here's What You Need to Remember: In any Korean peninsula assault, the U.S. Marine Corps will be leading the charge and they'll need to be well equipped.

HIMARS can be quickly moved ashore via Landing Craft Air Cushion hovercraft, and within minutes can carry out precision fire missions to ranges of up to forty-three miles. The Gimler, or Guided Multiple Launch System - Unitary (GMLS-U) GPS-guided rocket allows HIMARS to engage targets with first round precision. Recently, the marines experimented with chaining HIMARS trucks to the flight deck of amphibious assault ships, providing invasion troops with their own long range, extremely precise naval artillery support.