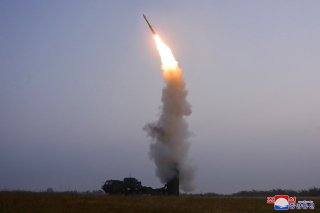 Here's What You Need To Remember: Pyonyang is concerned about recent deal for the United States and UK to provide nuclear-powered submarines to Australia.

No matter the status of diplomacy or the lack of diplomacy, the United States has been clear that it does not want North Korea to have access to nuclear weapons.

Over the weekend, North Korea pushed back on that, accusing the United States of “double standards.”

The North Korean Foreign Ministry recently published an article titled Is the U.S. Really a Guardian of the Nuclear Non-Proliferation Regime?” The article accuses the U.S. of continuing to increase nuclearization in other parts of the world, according to Yonhap News Service.

“The U.S. itself has ignored the principle of nuclear non-proliferation and allowed for double standards in line with their strategy for the domination of the world,” the article said, according to Yonhap News Agency. The article specifically mentioned the recent deal for the United States and UK to provide nuclear-powered submarines to Australia.

Back in October, North Korea launched a missile that some intelligence services said may have come from a submarine.

Also, in recent weeks, North Korea took aim at something else: Squid Game.

“It is said that the reason why the TV drama ‘Squid Game’ became popular with viewers was because it dug into the reality of capitalist society and South Korea, where the extreme competition for survival and greed for the weak were rampant,” North Korean website Arirang Meari said of the series. The piece went on to state of South Korea that, “where the number of losers in fierce competition such as employment, real estate, and stocks increases dramatically.”

Netflix is not available in South Korea, according to Nexstar. It’s unclear whether the anonymous author whose work was published by the Arirang Meari had seen the show.

Squid Game is the latest work of South Korean popular culture that has become ubiquitous worldwide, following the K-Pop revolution and the Oscar-winning 2019 movie Parasite, directed by Bong Joon-ho.  In fact, Squid Game has reached almost unimaginable heights of popularity. Netflix announced in early October that the series had reached 111 million fans in its first few weeks, making it the largest launch in the history of the service. This overtook the previous largest launch, last year’s Bridgerton.

“A big caveat: The proprietary metric that Netflix is using here is based on the number of accounts that picked a given title and streamed for at least 2 minutes,” according to an article published by media company Variety. “That sheds no light on how many people watched even one full episode — and includes those who checked it out to see what the fuss was about before turning it off. (Also note that Netflix’s measurements aren’t verified by a third party.)”