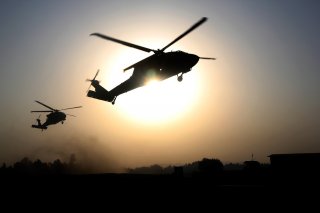 Here’s What You Need To Remember: In December 1951, a flight of MiG-15s buzzed the South Korean capital of Seoul at night, startling the U.S. military with the realization they had no night fighters jets that could meet the Soviet jets on equal terms. All three branches of the U.S. military hastily deployed their most advanced radar-equipped jets to counter the threat.

During its darkest hour in World War II, the hard-pressed Soviet air force deployed Po-2 units to harass German troops at night, including the famous all-female 588th “Night Witches” regiment. Though the night raiders inflicted only minor damage, they were devilishly difficult to track and shoot down and kept troops on the ground stressed and fatigued.

The North Korean Po-2s were later joined by around a dozen Yakovlev Yak-18 two-seat basic trainers. A more modern metal-and-fabric design that entered production in 1948, the Yak-18 could fly faster at 150 to 180 miles per hour but had shorter range. Nonetheless, both the Po-2 and Yak-18 could operate from short frontline airstrips at night, and concealed in barns or underground caves during the day.

Airbase technician Herbert Rideout recalled that Bedcheck Charlie “would fly over toss out small bombs hoping to hit a tent, aircraft or something else of importance. I found these night-time extravaganzas rather exciting. The sirens would go off, big searchlights would come on to try to find him and anti-aircraft batteries would begin firing with tracers which would light up the sky better than any Fourth of July that I had ever seen, and all the time we in trenches were shooting our rifles in all directions. Bed Check Charlie was very elusive and only one was ever brought down.”

Though UN forces disposed of air defense radars, they had only a few squadrons of F-82 Twin Mustangs, F4U5N Corsairs and F7F Tigercat fighters designed for night fighting. The Po-2s and Yaks flew low and slow and were not highly visible on radar due to their small size and fabric construction.

For the Air Force, this meant transferring F-94B Starfire jets of the 319th Fighter Squadron to Korea. The two-seater straight-winged jets were derived from the P-80 Shooting Star, the first operational jet fighter of the U.S. Air Force. The F-94 had first been developed in 1949 to counter the Soviet Tu-4 strategic bomber, a reverse-engineered B-29. The Starfire’s nose-mounted APG-33 radar helped it home in on enemy aircraft at short range, but it still required ground controllers with longer-range radars to direct it in the general direction of the enemy. An uprated J-33 turbojet compensated for the weight of the radar and radar operator and even featured the first functional afterburner on a U.S. military aircraft.

Larger F3D Skyknight jets of the Marine Corps and Navy were more successful over the night skies of Korea. Designed by legendary aviation engineer Ed Heinemann, who created the A-4 Skyhawk, the chunky Skyknight was nicknamed “Willy the Whale” due to its capacious fuselage, necessitated to accommodate both the extra-large thirty-inch radar antenna in the nose and its operator, seated beside the pilot.

The F3D’s AN/APQ-35 radar was more effective than the F-94’s, because it actually compromised three radars employing more than three hundred vacuum tubes: both a long-range search radar and a short-range tracking-and-targeting radar in the nose, plus a third rear-facing threat-warning radar to detect approaching attackers. The APQ-35 could detect fighter-sized targets over twenty-five miles away, which made the Skyknight more effective as a patrol plane—and its four twenty-millimeter cannons packed a heavier punch.