North Korea's Secret Weapon Isn't What You Think it Is 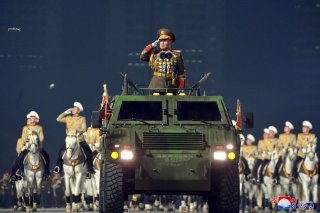 Here's What You Need to Remember: North Koreas's biggest military asset is a specific Army division

In any future war on the Korean Peninsula, U.S. and South Korean forces would encounter a familiar foe: the Korean People’s Army (KPA) 105th Armored Division. Equipped with North Korea’s most modern tanks and armored vehicles, the 105th Division’s mission is to rapidly exploit any breakthrough in the lines and drive deep into the heart of South Korea. The division traces its lineage to the first Korean War when its Soviet-made tanks panicked ill-prepared U.S. troops and very nearly achieved total victory.

In the event of war, the 105th would once again charge south, exploiting any breakthrough in ROK Army lines to make a dash towards Seoul and beyond. Unlike the last war, the 105th would likely fight as a single cohesive force. While the feasibility of such an invasion is up for debate, the 105th Seoul Guards Armored Division is still likely one of the most capable and prestigious tank units in Asia, with a storied past to live up to in any future war.

This story was first published in March 2018. It is being reprinted due to reader interest.