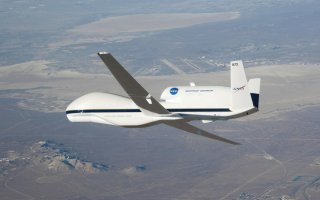 Here's What You Need to Know: The Global Hawk’s global reach is increasing.

Northrop Grumman’s Global Hawk is one of, if not the world’s premier surveillance and reconnaissance unmanned aircraft system—and the Air Force’s go-to eye in the sky—and it is slated for an upgrade.

A Hawk with Global Reach

The Global Hawk was developed in the mid- to late-1990s, and first entered service with the United States in 2001 just in time to see deployment to Afghanistan. Unusually, the Global Hawk was tossed into service while still in the prototype phase, with improvements steadily incorporated into the then-new platform.

During its nearly twenty-year service career, the Hawk has amassed some impressive numbers, including the first unmanned aircraft to cross the Pacific Ocean, and later set an 34.3 hour flight endurance record. Northrop Grumman lists the Global Hawk’s maximum altitude at 60,000 feet, and operational range at 12,300 nautical miles.

As a dedicated High Altitude, Long Endurance (HALE) platform, the Global Hawk foregoes weapons for a suite of observation equipment, including a synthetic aperture radar, a class of radar typically used on moving airborne platforms to create high-resolution, 3D images, particularly landscape features. In addition, Northrop’s Global Hawk is equipped with an electro-optical/infrared camera that allows for a day and night observation capability.

Birds of the Future

The Global Hawk of the future is certainly in for an upgrade in capabilities, but what the new Global Hawk would look like is still unknown. However, a glance through the Pentagon’s contract award hints at the Hawk’s future.

It is hard to overstate just how big this contract award is, both in monetary terms, as well as what it covers. The Pentagon award specified that the contract would cover:

The entire modernization effort is expected to take a decade, with an estimated completion year of 2030.

The Global Hawk’s global reach is increasing. In addition to the United States, the North Atlantic Treaty Organization, and South Korea, Japan is preparing to field their own Hawk fleet sometime in 2022. One thing seems likely: the Global Hawk will likely keep its place as the world’s most capable surveillance and reconnaissance platform for the foreseeable future.