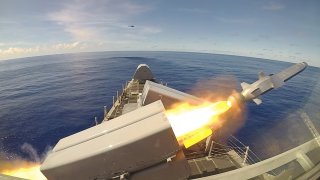 Here's What You Need To Remember: The Norwegian-designed Naval Strike Missile isn't supersonic, but is low-observable and deadly accurate.

One of the newest tactical missile designs around is built by the Norwegian firm Kongsberg. A Russian neighbor with a very long coastline, Norway required a modern missile capable of defending that coastline. The result is the Naval Strike Missile (NSM), a clean-sheet design that Kongsberg describes as “the only fifth-generation long-range precision strike missile in existence.”

NSM is currently in service with the Norwegian Navy, where it arms the Fridtjolf Nansen–class Aegis frigates and the Skjold fast attack boats. It is also operational with Poland’s Coastal Missile Division, which employs a truck-mounted version. The U.S. military, searching for a replacement for Harpoon, is very interested in this versatile missile, which could go on to arm Seahawk helicopters, cruisers, destroyers and the littoral combat ship (LCS). The missile was test-fired from the USS Coronado in 2014, striking a mobile test ship target off the coast of California. Kongsberg apparently thinks NSM has a bright future in the United States as it has already firmed up plans to manufacture them in Kentucky in cooperation with Raytheon.

A consequence of making the JSM fit inside the F-35 is that it is now compatible with the Mk.41 vertical launch system. The Mk. 41 VLS is the standard missile silo for U.S., NATO and other allied naval vessels. Previous missiles, such as Harpoon, were bolted onto the superstructure or deck of a ship where space allowed. This not only limited the number of missiles that could be carried but was detrimental to a ship’s radar cross section. Most ships with Mk.41 modules have scores of them, meaning even a destroyer-type ship such as the Arleigh Burke-class could theoretically carry up to ninety of them.