Not only Americans Land on U.S. Aircraft Carriers 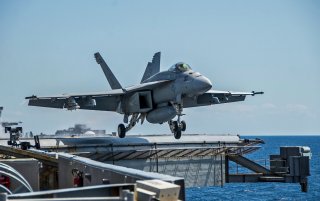 Key Point: Zooming out, the carrier landing is a small event. But it is noteworthy given the larger context of Finland partnering more with the NATO countries — a development which Russia is surely observing. Jarvinen told the U.S. Navy news service that he is bringing his carrier-landing experience back with him to Finland, where he will become a pilot instructor.

On March 17, 2017, in the Atlantic, a fighter jet landed onto the Nimitz-class aircraft carrier USS Abraham Lincoln. The only difference this time was that the pilot was Finnish, not American.

Nimitz-class aircraft carriers — with two exceptions, the Ronald Reagan and George H.W. Bush — have four arresting wires or cables. Catching the third cable is safest, but snagging the second one isn’t bad.

The Finnish navy has no need for carriers, and its reason for existence is primarily coastal defense provided by a small fleet of minelaying and fast-attack craft. The most important Finnish naval project at the moment is the Squadron 2020 project, which aims to build four corvettes armed with U.S.-made RIM-162 Evolved SeaSparrow anti-aircraft missiles, anti-ship missiles, torpedoes, and mines.

The Finnish air force operates some 62 Hornets, 62 F/A-18Cs, and seven F/A-18Ds — the latter a two-seat variant — for a total of three squadrons. That is the same type of fighter Jarvinen flew when he touched down on the Abraham Lincoln.

Finland is in the early stages of shopping around for a replacement fighter, which could be new F/A-18E/F Super Hornets, F-35 Joint Strike Fighters or F-16s. Or Finland could buy European Gripens, Rafales, or Typhoons. Causing confusion, U.S. Pres. Donald Trump incorrectly claimed that Finland was buying Super Hornets during an August 2017 press conference with Finnish Pres. Sauli Niinistö.

This piece was first featured several years ago and is being republished due to reader's interest.