Not Used As Intended: The M42 Duster 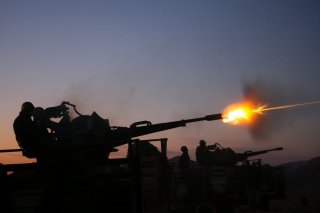 Here’s What You Need to Remember: The M42, nicknamed “Duster,” was able to provide base and perimeter security, and in some cases served as point security on patrol.

The M42 was originally fielded during the Korean War as a more-effective anti-aircraft replacement for older, Second World War-era vehicles. Using components from the M41 Walker Bulldog light tank, notably the chassis, a powerful open-top turret was mounted to the hull. But, rather than sporting the M41’s 76mm main gun, the M42 opted for two powerful 40mm main guns.

In addition to the M42’s two large-caliber main guns, a .30 caliber machine gun was also mounted to the hull. In addition, the M42’s nearly 25-ton weight was fairly mobile, thanks to a 500-horsepower gasoline engine at the rear and good ground clearance.

The advent of the jet age doomed the M42 before it could prove useful. The increasingly high, Mach 1+ speeds of the new fighter jets meant that anti-aircraft guns would play a less important role in air defense. Surface-to-air missiles rather than exploding shells would be required to take out enemy planes. In recognition of the platform’s shortcomings, the Army retired the M42 in the late 1950s, and production ended shortly thereafter. But, all was not lost for the compact and powerful M42.

Early surface-to-air missiles were considerably less effective than today’s sophisticated systems. At lower altitudes especially, some of the United States’ state-of-the-art missile technology was unreliable and provided an opening for the M42—and some were recalled into service to fill the gap in low-level air defense.

From the Air to the Ground

The M42 performed best when its guns were not pointed skyward, but rather toward the ground, used in infantry support. Despite the M42’s open-topped turret, the hull’s all-steel armor protection gave it some protection from enemy fire from the ground. Moreover, the dual 40mm Bofors guns were devastating.

The M42, nicknamed “Duster” was able to provide base and perimeter security, and in some cases served as point security on patrol. The gun’s 40mm shells—or over 1.5 inches—were more than large enough to penetrate the thick jungle foliage endemic to Vietnam, though there were reports that the shell’s sensitive point impact fuses could be susceptible to early detonation.

Given the Duster’s age, they were not always favored for patrol, as the wear and tear on suspension, transmission, and engine components could result in breakdowns, though the M42’s relatively simple design allowed some maintenance and repair to be done in the field with limited support.

After Vietnam, the Duster was retired from American service, though some M42s were exported to American allies, including West Germany and elsewhere. In Austrian service, the M42 wasn’t retired until the early 1990s—not too bad for an anti-aircraft platform that was ultimately unsuccessful against airplanes.