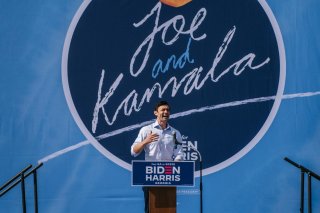 Two Democrats were announced the winners of the run-off elections for Georgia’s two Senate seats, allowing the Democrats to take back control of the chamber from the Republicans.

Jon Ossoff and Raphael Warnock were the first Democrats to win a Georgia Senate race in a quarter of a century. It also marked the first time since Herbert Hoover’s loss in 1932 that a president lost a re-election campaign and both chambers of Congress in a single term.

Also today, a number of Republicans in Congress launched their last-ditch effort to contest the outcome of a presidential election — just the third such formal objection in US history.

And thousands more people died from COVID-19, as the US continues to notch some of its highest single day death tolls since the pandemic began.

But today will be most remembered for something else entirely: the first attack on the US Capitol since the War of 1812 against the British.

Many warned that President Donald Trump’s violent and divisive rhetoric was inevitably going to lead to violence, though few would have predicted the Capitol itself would be overrun.

Today’s violence will remain a shocking moment for generations of Americans. Trump’s own former defence secretary, James Mattis, invoked the language of Franklin Delano Roosevelt to say that the political leaders who enabled the violence will “will live in infamy”.

No massive mandate for the Democrats

As Democrats prepare to take control of the presidency and both chambers of Congress, their attention must be focused on how to address the divisiveness and extreme partisanship that has become rooted in the US, allowing such a dramatic assault on democracy to take place.

Hoover’s landslide election loss to Roosevelt in 1932 similarly gave the Democrats control of the White House and Congress. The Democrats used this opportunity to launch the New Deal — a series of government programs and initiatives intended to lift the US out of the Great Depression. It was unprecedented in its size and ambition.

Many of these programs — ranging from Social Security (a government safety net for elderly Americans) to government regulatory agencies like the Securities and Exchange Commission and the Federal Deposit Insurance Corporation — were later expanded upon and continue through to today.

Unlike Roosevelt and his fellow Democrats in 1932, however, Joe Biden and his Democratic colleagues did not win landslide elections in 2020.

In fact, while Biden’s 306 Electoral College votes matched the total won by Trump in 2016, his pathway to victory was smaller.

In other words, if merely 45,000 votes in those three states went for Trump, there would have been a tie in the Electoral College, likely resulting in a Trump win.

Similarly, the Democratic Senate candidates in Georgia did not win in landslides, either. And with the Senate now evenly divided by the parties, Vice President-elect Kamala Harris will spend a lot of time breaking 50-50 ties of her former colleagues in the chamber.

And beyond the White House and Senate, the Democrats actually lost, on balance, a total of 10 seats to the Republicans in the House of Representatives, thereby slimming their majority to only four seats.

How Biden will navigate the new Congress

But there are still clear advantages for the Democrats taking control of the Senate.

With Republicans no longer controlling when, or even if, votes occur in the Senate, everything from Supreme Court justices and Cabinet appointments to major pieces of legislation will no longer be contingent on Republican Mitch McConnell, the outgoing Senate majority leader.

In such a narrowly divided chamber, though, the onus will be on the Biden administration not to lose a single Democrat.

In many ways, the most powerful position in the Senate switches from McConnell to Joe Manchin of West Virginia and Kyrsten Sinema of Arizona, the two most conservative Democratic senators. They will likely prove to be the limits as to just how progressive a Biden agenda will be.

The Biden administration will need to get approval from a “large tent” of Democrats, including Manchin and Sinema, as well as progressives like Elizabeth Warren and the independent Bernie Sanders.

Ultimately, this slim hold on power will remain a hallmark of at least the first two years of the Biden administration.

That doesn’t, however, mean it will necessarily be divisive. In coming to the White House with more Washington experience than probably any other president in US history, Biden will need to prove that decades of experience as a “Washington insider” actually helps.

What will change for Biden — and what we can expect

Even before the Georgia races were called in the Democrats’ favour, Merrick Garland was tipped to be Biden’s choice for attorney general. Following four years of Trump’s blatant attempts to politicise the Department of Justice, no attorney general selection has been as consequential in decades.

This is particularly pertinent because Biden has vowed to restore the Justice Department’s independence, which would prove crucial if it faces public pressure to investigate the actions of the prior administration.

Garland is not only President Barack Obama’s former Supreme Court nominee, whom McConnell famously refused to allow a vote on. He’s also a circuit judge of the US Court of Appeals for the District of Columbia, one of the most consequential courts in the country.

It was the fact Biden can now replace Garland’s seat on this powerful bench with another Democrat — thanks to Democratic control of the Senate – that gave him the opportunity to make the selection.

Derisively labelled by some a political “weather vane”, Biden is not known to be a particularly ideological politician. Unlike most other presidents, he was not elected with a well-known ideological or political slogans focused on the future (for example, “Build the wall”, “Yes, we can” or “It’s the economy, stupid”).

Instead, Biden’s most well-known 2020 slogan, “Restoring the soul of America”, seemed to herald a return to prior years.

While many Americans may be pining for more normalcy, Biden has already seemed to acknowledge that doing so would not address the root causes of the sort of mayhem that occurred on Capitol Hill.

The most pressing priorities, as defined by the Biden administration, are COVID-19, economic recovery, racial equity and climate change.

Taking control of the Senate, as well as the unprecedented unrest in Washington, will both widen the scope and redouble the urgency of the Biden team’s plans for addressing these issues.

But we shouldn’t expect a progressive revolution: the president-elect’s moderate tendencies are unwavering and unlikely to leave him simply because of Democrats eked out wins in Georgia. With that said, when the political spectrum has become stretched beyond conventional recognition, such moderation can often appear to be radical.