Nuclear-Power Takes to the Sea: The Story of the USS Nautilus 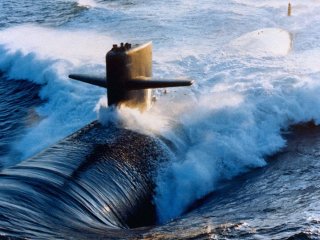 Here's What to Remember: In 1958, the United States government pushed to have a nuclear-powered submarine reach the North Pole, both as a response to the Sputnik satellite launch and to prove that Polaris-missile-armed submarines could operate above the Arctic Circle.

Nautilus was formally commissioned into service on September 30, 1954, but it didn’t take to the sea for months. Its reactor was started up on December 30, and on January 17, 1955, it finally left the pier, sending the signal UNDERWAY ON NUCLEAR POWER. It quickly broke distance and speed records, including a submerged trip from New London, Connecticut, to Puerto Rico, a distance of 1,381 miles in ninety hours, or an average of fifteen knots.

In 1958, the United States government pushed to have a nuclear-powered submarine reach the North Pole, both as a response to the Sputnik satellite launch and to prove that Polaris-missile-armed submarines could operate above the Arctic Circle. On July 23, 1958, Nautilus became the first ship to reach the North Pole—above or below the ice. Nautilustraveled from Hawaii to Greenland, perhaps the most unusual voyage undertaken thus far by any ship.

In an era where technological progress was rapid, Nautilus was a stunning achievement. Just nine years after the atomic bomb test at Alamogordo, New Mexico, Nautilus was underway and using nuclear power. Not only that, but the submarine proved that nuclear propulsion was safe and efficient, paving the way for an all-nuclear U.S. Navy submarine fleet. During its career, it made 2,507 dives and traveled 513,550 miles without incident. A trailblazer, Nautilus’s success ensured that the U.S. submarine fleet would maintain technological superiority over its Soviet Navy for the remainder of the Cold War.