Nuclear vs. Cyber Warfare: Which is the Bigger Threat? 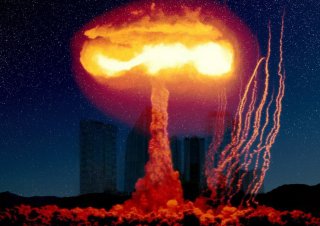 A strategist provides the decision-maker with at least three options: the most likely option, the least likely option and the most dangerous option. This methodology applies to all strategists, regardless of their discipline—national security, diplomacy, economics, health care, home affairs. The essence of their tradecraft is to analyse, assess and advise so leaders can make informed decisions—and then act.

For those who grew up during the Cold War and its dogma of mutually assured destruction (MAD) between the Soviets and the US, nuclear weapons were the world’s most destructive threat. Without question, for most strategists, they were the most dangerous option and, on several occasions, also the most likely option.

Still today, there’s no denying the catastrophic effect of a nuclear weapon. However, to a nation such as Australia, is the detonation of a nuclear device our most likely threat? Our most dangerous threat?

We live in an age of cybernetics and the ‘internet of everything’. All things seem to be connected and dependent on digital technologies, and those dependencies disrupt all aspects of truth and veracity. Smartphones, messaging apps and social media shape our public, political and national security environments, to the point that we must ask ourselves as a nation: What’s the most likely and what’s the most dangerous threat to our sovereignty? Is it a nuclear detonation, a physical invasion, or something else?

Nuclear weapons remain the most physically destructive instruments of war ever invented, but, as the Cold War showed, they also have a stabilising effect because they make conflict escalation, potentially, too costly. In many respects, the fear of MAD remains the check and balance for those nations with a nuclear capability today.

In addition, due to MAD’s global implications, a robust indications and warning system, especially among the Five Eyes nations, to monitor and detect activities associated with nuclear devices—be it armament, delivery system or development—is in place. Even the threat of a ‘loose nuke’ or a terrorist’s ‘dirty bomb’ is scrutinised almost hourly by those in Russell and the Pentagon, and tabletop exercises to prepare them for the most likely and most dangerous options occur regularly. The fact is, a Cuban missile crisis–type event is not Australia’s, or its Five Eyes partners’, most likely threat now or in the near term.

If not a nuclear or physical threat, then, what is the most likely threat to Australia? Is it the release of a chemical or biological weapon, such as Covid-19, if it’s done with malice and forethought by a nation-state or a terrorist group? What about the threat from cyberattacks or information warfare? Could implanting malware like WannaCry, which crippled the UK’s national healthcare system, or NotPetya, which affected the power-distribution systems of the Netherlands and Ukraine, be construed as being as destructive to a nation as a nuclear blast? Or what about Secondary Infektion, which used social media to incite public and political discontent in Europe and the US?

Most strategists would argue that biological or information warfare is in the ‘grey zone’ of conflict, referring to it as hybrid or political warfare. But is a Twitter or malware bomb any less destructive in its magnitude of effects than a nuclear bomb? Is destructive power in 2021 based solely on kinetic yield? How do you measure the ‘fallout’ from attacks like WannaCry or Secondary Infektion and their non-kinetic effects on globalisation, economies, governance and healthcare systems?

In 2021, the Five Eyes’ adversaries are truly embracing the Clauzwitzian adage that ‘war is politics by other means’. Instead of being fixated on enriching uranium and deploying mobile nuclear delivery systems, they’re focused on weaponising the other components of national power—diplomacy, information, culture, economics and the rule of law. They’re employing innovative combinations of economic espionage and supply-chain manipulation to access our critical infrastructures. They steal our intellectual property and industrial secrets through malicious influence campaigns using information operations and political subversion to sow divisions in our society, undermine confidence in our democratic institutions and weaken our alliances.

Today, we are more likely to be affected by the burst effects of a Twitter or malware blast much more than by a nuclear or conventional blast. Even more alarming is that, unlike the indications and alerts associated with a nuclear attack, all a nation-state or terrorist group needs is access to an internet connection and some disruptive messaging or malware and the strike can commence with virtually no warning. The fact is that Australia’s adversaries are effectively utilising the entire spectrum of conflict to pursue their national interests against us, carefully weighing their objectives while avoiding direct military action. To them, violating our nation’s sovereign cyberspace or electromagnetic spectrum is not considered an aggressive act. Why? Because we continually allow them to do it. But how is that different from violating our territorial waters or airspace?

So, in 2021, Australia’s most likely threat is probably from an information-warfare system, such as a Twitter or malware bomb. Its least likely threat: an atomic or physical attack. And its most dangerous threat: leaders and decision-makers who fail to act on that which is most likely.

This article was first published by the Australian Strategic Policy Initiative