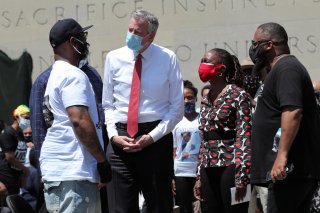 New York City Mayor Bill de Blasio was overwhelmingly booed as he took the stage at a vigil for George Floyd in Brooklyn on Thursday.

As de Blasio and his wife, Chirlane McCray, were introduced and walked up to the podium, many in the crowd could be heard booing them in a video shared to Twitter by ABC News correspondent Dan Linden, even as their introducer asked the crowd to respect the two multiple times.

De Blasio has come under intense criticism for his response to the protests that have stemmed from the death of George Floyd, who died on May 25 after a Minneapolis police officer held his knee on Floyd’s neck for over eight minutes, video of the event shows.

Eric Ulrich, a Republican councilman from Queens, called for de Blasio to resign over his failure to prevent violence from occurring Wednesday evening, urging New York Governor Andrew Cuomo to “step in & remove him from office,” and adding that he would call for a vote of no confidence in the New York City council.

Many former aides to the mayor were quick to criticize his position on the protests, including roughly 400 current and former staffers who signed a public letter demanding de Blasio cut funding to the New York Police Department only hours after tensions escalated.

Responding to criticism early Thursday morning, the mayor said that he did not believe that his former aides fully grasped the situation saying that he was “not sure they understand the depth of the reality of what we’ve faced.”

“No matter what is happening around us, we’ve got to support each other,” the mayor said.