An Ode to History: The Legendary USS Enterprise 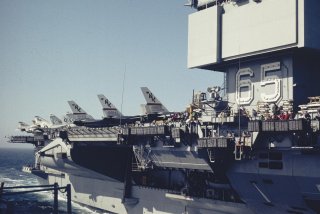 Here's What You Need to Know: The first nuclear-powered aircraft carrier in history participated in the 1962 blockade of Cuba and launched some of the first airstrikes over Afghanistan in 2001.

Enterprise was deactivated on December 1, 2012. For its last five years, it was gradually prepared for disposal, stripped of military equipment and its reactors powered down. The ship was formally decommissioned on February 3, 2017, in a private ceremony at the Newport News Shipyard in Virginia.

This article first appeared several years ago. It's being reprinted due to reader interest.