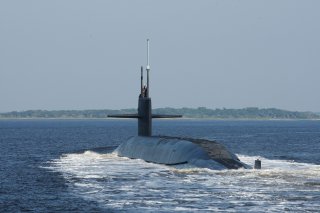 Here's What You Need to Know: While a first strike might wipe out a country’s land-based missiles and nuclear bombers, it’s very difficult to track a ballistic-missile submarine patrolling quietly in the depths of the ocean—and there’s little hope of taking them all out in a first strike.

The logic of nuclear deterrence: While a first strike might wipe out a country’s land-based missiles and nuclear bombers, it’s very difficult to track a ballistic-missile submarine patrolling quietly in the depths of the ocean—and there’s little hope of taking them all out in a first strike. Thus, ballistic-missile submarines promise the unstoppable hand of nuclear retribution—and should deter any sane adversary from attempting a first strike or resorting to nuclear weapons at all. At least that’s the hope.

The Ohio-class boats entered service in the 1980s as a replacement for five different classes of fleet ballistic-missile submarines, collectively known as the “41 for Freedom.” Displacing more than eighteen thousand tons submerged, the new boomers remain the largest submarines to serve in the U.S. Navy—and the third-largest ever built. With the exception of the Henry M. Jackson, each is named after a U.S. state, an honor previously reserved for large surface warships.

In the event of a nuclear exchange, a boomer would likely receive its firing orders via Very Low Frequency radio transmission. While a submarine’s missiles are not pretargeted, like those in fixed silos, they can be assigned coordinates quite rapidly. The first eight Ohio-class boats were originally built to launch the Trident I C4 ballistic missile—an advanced version of the earlier Poseidon SLBM. However, by now all of the boomers are armed with the superior Trident II D5 ballistic missile, which has 50 percent greater range and is capable of very accurate strikes, which could enable them to precisely target military installations as a first-strike weapon.

This article first appeared in January 2017 and is being republished due to reader interest.