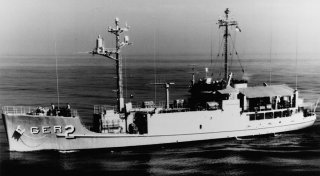 Here’s What You Need to Remember When the USS Pueblo slipped from its quay in Yokosuka, Japan on January 5, 1968, its crew of eighty-three could not have anticipated that what would have been a routine mission would turn into an eleven-month ordeal that would bring the United States and North Korea to the brink of war and back. The Pueblo’s crew would be confronted with a no-win scenario intended to distract from Pyongyang’s recent indiscretions and further intrigues within the Eastern Bloc.

Today signals intelligence remains a common form of espionage—and a basic legal one, so long as the ships involved do not stray into territorial waters and aircraft stick to international airspace. Recently, the Russian spy ship Viktor Leonov was observed thirty miles off the U.S. East Coast. U.S. Air Force RC-135 Rivet Joint aircraft routinely intercept signal traffic from North Korea and other nations. However, these electronic spies can only operate so long as the nations they are spying on respect the norms of international law—a risky proposition when tensions are high and the nation in question is governed by a capricious regime.

The subchaser’s captain was not satisfied, and continued to close on the Pueblo. Soon afterward, two North Korean MiG-21 fighters swooped low over the 890-ton spy ship, and three P-4 torpedo boats joined the subchaser to surround the American vessel. Bucher turned the ponderous Pueblo around and made full speed eastward, managing to worm his ship away from a torpedo boat that attempted to land a boarding party toting AK-47s. The North Korean boats began raking the Pueblo with heavy machine-gun fire and blasting at it with the fifty-seven-millimeter cannon on the subchaser. Shrapnel sprayed across the bridge, wounding Bucher.

The Pueblo’s only weapons were two unloaded .50 caliber machine guns wrapped up in ice-coated tarps. (The spy ships were supposed to keep their defensive weaponry discrete.) The machine guns lacked gun shields and only one crew member had been trained in their use. Bucher judged that any crew members attempting to load and fire the weapons would be massacred by the nearby boats and that a few .50 caliber machine guns would not be of much use against an adversary armed with torpedoes and cannons.

The North Korean attack came at the worst possible moment. Seoul feared renewed attacks across the demilitarized zone, and threatened to withdraw South Korean troops from Vietnam. The war in Vietnam was heating up, as North Vietnamese forces embarked on a series of preliminary attacks culminating in the epic Tet Offensive. A CIA A-12 spy plane from Project Blackshield located the Pueblo in Wonsan harbor on January 28. CIA director Richard Helms thought the North Koreans had launched the attack as part of a Soviet plot to relieve pressure on Vietnam.

Declassified documents reveal that President Johnson considered options ranging from mining Wonsan harbor or organizing a naval blockade, to launching a battalion-sized ground attack on part of the demilitarized zone and airstrikes. Ultimately, however, he chose to go with a show force, deploying hundreds of combat aircraft and three aircraft carriers to South Korea, and mobilizing fourteen thousand Air Force and Navy reservists. Soon the Soviet Union offered to aid in securing the release of the Pueblo’s crew if the United States drew its forces back down. Not wanting to get drawn into a second Korean War just as the fighting was intensifying throughout South Vietnam, Johnson decided to draw down his forces, and offered Seoul additional military aid on the condition that it did not instigate a clash with North Korea.

Pyongyang, for its part, trumpeted its capture of the Pueblo, which it falsely claimed had intruded in North Korean waters. (North Korea defines “international waters” as beginning fifty nautical miles, rather than twelve, from its shores.) In time, North Korea began issuing photos of the captured American crew and a signed confession from Captain Bucher, causing the CIA to assemble a psychological profile of the Pueblo’s commander in an attempt to gauge his loyalty. The crew’s plight evoked an outpouring of sympathy in the United States and even inspired a Star Trek episode.

In truth, the Pueblo’s crew was being brutally tormented, subject to daily beatings and undergoing hours of interrogation. Captain Bucher in particular was battered until he urinated blood, made to sit through his own mock execution, and shown a mutilated alleged South Korean spy as a warning of the consequences of not cooperating. At one point he went on a five-day hunger strike to protest the wretched food provided to his crew, which was so inadequate that one petty officer lost 40 percent of his body weight and nearly went blind. Finally, a North Korean interrogator threatened to execute the Pueblo’s youngest crewmember, nineteen-year-old Howard Bland, in front of Bucher if he did not sign a confession, to be followed by the rest of his crew. This threat finally moved Bucher to sign the confession.