One Against Four: This U.S. World War II Destroyer Took On a Whole Armada of Japanese Battleships 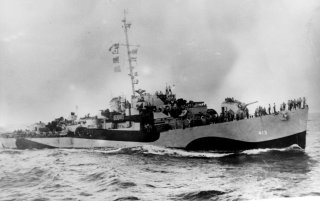 Here's What You Need to Remember: If naval warfare were likened to chess, World War II-era destroyers were surely pawns: numerous, expandable and versatile frontline fighters that excelled at protecting more valuable ships from encroaching enemies.

Thus did Lt. Cmdr. Robert W. Copeland, captain of the destroyer-escort Samuel B. Roberts address his crew over the ship’s public address system on October 25, 1944 as he prepared to turn his ship around and charge straight towards a Japanese armada consisting of eleven destroyers, eight cruisers, and four battleships.

Copeland wasn’t exaggerating. Amongst the foes facing Roberts and other ships in Task Force 74.4.3 (“Taffy 3”) was the Yamato, the largest battleship ever built, with three triple 18.1” gun turrets. At 65,000 tons, the battleship alone out-grossed all six escort carriers, three destroyers and four destroyer-escorts in Taffy 3.

The small ships in Taskforce 74.4 were only supposed to cover a nearby invasion fleet in Leyte Gulf against sporadic air and submarine attacks. However, the day before Admiral ‘Bull’ Halsey had redeployed the fast battleships also covering the beachhead to assist in a night-ambush of an approaching Japanese fleet at the Suriago Strait. He assumed that a separate Japanese fleet under Admiral Takeo Kurita approaching from the west had been driven off by heavy air attacks.

This assumption proved fatally inaccurate. Kurita’s powerful ships began potting shells at the Taffy 3’s escort carriers at 7 AM. To buy time for the slow carriers as they fled eastwards, Read Admiral Clifton Sprague had the escorting destroyers and destroyer-escorts (anti-submarine frigates) lay down a dense smokescreen using generators in their smokestacks. (The critical actions of the carriers and their aircraft are detailed in a companion article.)

The 114-meter-long Fletcher-class destroyers Heermann, Hoel and Jonhston grossed only 2,500 tons fully loaded and were dubbed “tin cans” due to their lack of armor.  Each was armed with ten torpedo tubes and five turreted 5” 38-caliber dual-purpose with a maximum range of ten miles that could fire rapidly and accurately thanks to their Mark 37 radar-assisted fire control systems. However, they had little chance of penetrating the thick armor belts on Japanese cruisers and battleships

The small 1,700-ton John C. Butler-class destroyer escorts (anti-submarine frigates) had just two 5” guns and three torpedo tubes for anti-ship armaments. However, just a few hits below the water line from 825-pound warheads of Mark 15 torpedoes could threaten even a battleship. But these only had an effective range of three to five miles—and the further away they were launched, the more time the target had to evade them.

The destroyer Johnston was first to engage the Japanese fleet, zig-zagging wildly to evade incoming shells as she lay a 1.5-mile long curtain of smoke. Her captain Commander Ernest Evans then decided to a charge Kurita’s fleet head-on.

Over the next five minutes, the Johnston unleashed 500 shells into the heavy cruiser Kumano as she closed to unleash a full spread of ten torpedoes. Narrowly missing the battleship Kongo, one blasted the bow clean off the Kumano, taking her out of the fight.

Abruptly, the Yamato slammed six 18.1” and 6” armor-piercing shells into Johnston’s bridge. Fortunately, these penetrated straight through the unarmored vessel rather than detonating, but still mangled Evan’s left hand, left the search radar tattered in fragments on the deck, and disabled power to three of his five gun turrets. Evans managed to steer into a nearby squall for cover to effectuate repairs.

The destroyer Hoel was even less fortunate, her bridge destroyed by a 6.1” salvo early on, wounding her captain and knocking out her radio.

By 7:15, Taffy 3 too had found respite in a nearby sea squall. But Sprague knew the further east he sailed, the farther he was from hoped-for reinforcements. He decided he had to turn south—but needed a distraction to prevent the faster Japanese ships from simply heading off his carriers. So around 7:40 AM he instructed the escorts to close for a torpedo run—a seemingly suicidal act that was immortalized as The Last Stand of the Tin Can Sailors in a book by James Hornfischer.

This occasioned Copeland’s speech on the destroyer-escort Samuel Roberts, which pressed forward at flank speed, her guns silent to avoid being spotted. Despite taking a shell to the mast for her trouble, she closed within two miles of the heavy cruiser Chokai and unleashed her three torpedoes—one of which blasted away the Chokai’s stern.

The already wounded Hoel managed to release half her torpedoes at maximum range but was then shot to pieces, with her guns knocked out and engine damaged. Despite limping at half speed, her injured captain Leon Kintberger circled around to launch a second salvo. Combined with torpedoes fired by the Heermann, these forced the Yamato to disengage with evasive maneuvers, removing the deadliest enemy ship from the battle.

Now surrounded by Japanese ships, the Hoel sustained forty hits from various naval guns, flooding her engine room and setting fire to her ammunition stores. Still, the battered destroyer continued exchanging fire with Japanese cruisers until she capsized at 8:55—leaving behind only eighty-six surviving crew out of the 339-man crew.

Having expended his deadliest weapons, Roberts rejoined the carriers only to bump into the cruiser Chikuma laying broadsides into the vulnerable flat-tops. The escort closed for a gun duel with the Tone-class cruiser grossing nine times its, pummeling it with rapid-fire anti-aircraft guns and over 600 five-inch shells in thirty-five minutes. Combined with fire from the roving Heermann—the attack set Chokai’s bridge on fire.

Soon, several cruisers and all four battleships were lobbing 8”, 14” and 18” shells at the Roberts as she weaved evasively at twenty-eight knots. The little vessel’s outrageous fortune could not last. An 8” shells damaged one of her boilers, reducing speed by 60 percent, and one of her’s overheated and exploded.

Finally, the Kongo tore a twelve-meter-long hole in the Robert’s engine room with three 14” shells. At 9:35 Copeland finally gave the order to abandon ship. 120 of her over 200 crew managed to escape.

The Heermann too was engaged by both the Chikuma and Tone, sustaining 8” shell impacts that destroyed her wheelhouse. She managed to withdraw behind the cover of a smoke screen.

The hobbled and now torpedo-less Johnston too joined the charge. Closing within four miles of Kongo, she struck the battleship fifteen times before ducking back into the smoke to dodge return fire. She then “crossed the t” of a squadron of seven Japanese destroyers—pitting her full five-gun battery against only the frontal guns of the Japanese vessels. Raked by 5” shells, the entire squadron peeled away to the west and opted to launch long-range torpedo attacks.

The battle by then had become a confused smoke-filled melee, with numerous near-collisions between the American escorts.

Finally, around 9 AM Kongo got the drop on the Jonhston again, crippling her engines with her 14” guns. Unable to maintain the high speeds necessary to dodge shellfire, Japanese guns redirected their fire at her instead of the elusive carriers. Johnston was completely dead in the water by 9:40 AM—by which time the Kurita had ordered the withdrawal of the Japanese fleet, believing Taffy 3’s destroyers and escort carriers to be cruisers and fleet carriers.

Evans finally ordered to abandon ship at 9:45. The Japanese destroyer Yukikaze fired a final killing blow, her captain reportedly saluting the sinking ship as he steamed by. 270 of the 330-man crew made it into the water—but only half were recovered from the water two days later. Evans was not among them.

Of the destroyer, only the heavily-damaged Heermann survived. Besides the doomed Roberts, the destroyer escorts Dennis, John C. Butler and Raymond survived charge, having released all their torpedoes and expended their 5’ shells. Of over 1,500 Americans that died in the Battle of Samar, most came from the escorts.

In a seemingly hopeless fight, the tin can sailors had willingly tackled far more powerful warships—damaging, delaying and distracting them to help save vulnerable aircraft carriers with over nine hundred crew each. The free-wheeling gallantry of their bold act of sacrifice remains one of the most extraordinary incidents in naval history.