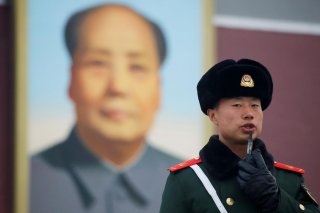 Since the founding date of the People’s Republic of China on October 1, 1949, a portrait of Mao Tsetung has hung in the square over the “Gate of Heavenly Peace,” except for one day, March 9, 1953, when it was temporarily replaced by a portrait of Joseph Stalin to commemorate the death of that other Communist tyrant. It weighs 1.5 tons and is replaced by a new one annually or whenever some brave soul dares to vandalize it. (As far as one can tell, the students who occupied Tiananmen 31 years ago did not harm the portrait.)

The continued veneration to this day of a man who is estimated to have been responsible for as many as 70 million Chinese deaths — from executions, labor camps, and the man-made famine of the Great Leap Forward, as well as the violence of the “Cultural Revolution,” — is little short of amazing.

But perhaps that can best be explained by the fact that it has always been forbidden in China to tell truth about Mao, or about his successor today, Xi Jinping.

Even Deng Xiaoping felt compelled to pass a verdict on Mao that he was 70 percent correct, but 30 percent wrong. [Historians might think that Deng got the numbers backward, at best.]

Today, General Secretary of the Chinese Communist Party Xi Jinping seems intent on turning the clock back, if not to the days of the Cultural Revolution, then to something that might be called “Maoism with up-to-date surveillance technology.”

This article by Paul Wolfowitz first appeared in AEIdeas on June 3, 2020.