The One Thing the Russian Military Might Can Beat 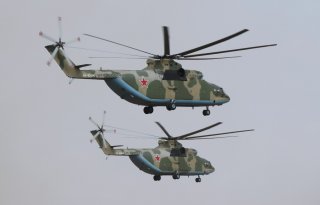 Here's What You Need to Remember: As a great power, Russia has lofty ambitions for the modernization of its military. Budget constraints, more competition from elsewhere and other issues, however, mean many of the army's most ostentatious projects never make it past the showroom.

Russia's defense industry is face to face with a major foe, but it's not a foreign military power. The Kremlin has been striving to modernize all branches of the Russian military, but the country's defense industry is struggling thanks to decreasing volumes of orders, difficulties in attracting high-skilled talent and limits to its technological capabilities. According to recent figures, the performance of Russia's aerospace sector is declining precipitously. In 2018, for instance, Russian aircraft and spacecraft makers produced 13.5 percent less than in 2017. And there's been no letup in 2019 either: In the first two months of the year, aerospace output plummeted 48 percent year on year.

The decline in Russia's defense output raises concerns about the competitive strength of Russia's defense industry in general, whose health is critical if the country is to project itself as a military power in the longer term. Russian Deputy Prime Minister Yuri Borisov attributed the reduction in output to a slowdown of orders for military systems, but projections suggest the slowdown is not just a short-term fluctuation; in fact, it's expected to become even worse in the future. The downturn in oil prices has taken a bite out of Russia's bottom line, squeezing spending for the military — all at a time when the country's arms manufacturers have lost their competitive edge in the global arms market. Together, these factors ensure that Russia's defense industry will struggle to get out of its funk.

Suffering From a Dearth of Funds

This dire picture stands in stark contrast to Russia's frequent presentation of sensational new platforms. In reality, however, just a few of the big-ticket weapon systems — such as the T-14 main battle tank or the Su-57 fighter aircraft — find buyers, as the rest remain mere prototypes. Russia has prioritized some hardware, such as the Sarmat intercontinental ballistic missile, due to their strategic relevance to the country's overall military posture, but Moscow has failed to fully develop other programs or only introduced them on a limited scale.

Under pressure from a limited government budget, the Kremlin even started reducing its military spending in 2017 — a strong indicator that, despite the modernization push, Russia's financial challenges are taking a toll on the country ambitions. Economically, the plunge in oil prices at the end of 2014 hurt Russia's bottom line, depriving the country of essential revenue and forcing it to dip into its reserves to bridge the gap. Today, more than four years on, Russian oil revenues are rising, yet the country is continuing to deal with the consequences of the lean years. Beyond that, low revenues from taxes, which have forced Russia to raise taxes and the retirement age, and Western sanctions over Moscow's activities in Ukraine and elsewhere, have shrunk the financial pool available to military planners.

But the Kremlin's problems don't end there. In the past, Russia has benefited from its position as a major global arms exporter to fuel further military development. During the 1990s, for example, such sales were critical to the country as it faced severe economic hardship. While Russia remains the world's second-largest arms exporter (only the United States sells more), the actual value of those exports has been decreasing significantly. Between 2014 and 2018, their total value dropped by as much as 17 percent. Again, budgetary limits are somewhat to blame: In the past, Russia frequently used arms exports as a political tool, offering weapons at a heavy discount, if not entirely free. But with Russia no longer able to offer customers a good deal on its fighter jets and other defense products, the country is losing business.

And Russia's arms industry faces an even greater problem in the years to come: reduced competitiveness. Russia has long dominated some of the market by offering affordable military equipment without attaching any conditions regarding human rights, but the rise of China's military industry, as well as several smaller producers around the world, has made it much more difficult to compete for contracts.

Ultimately, the loss of export opportunities not only complicates Russia's efforts to finance its defense industry, it also reduces the scale at which the defense industry produces, which, in turn, decreases scale-dependent savings that accompany higher levels of production. In effect, this means that the more Russia fails to find foreign customers for specific weapon systems, the more it will become burdened with a higher relative cost per unit as it seeks to meet its own needs. The conundrum, in turn, will further limit Russia's ability to competitively price weapons systems for export, thereby perpetuating the effect.

This is why, for example, India's withdrawal from the joint development and production of the Su-57 fighter aircraft last year has cast doubt on Russia's ability to sustain the program in a meaningful way or at an acceptable cost. As a result, Russia has sought — albeit unsuccessfully so far — to export the Su-57 more widely in an effort to find a partnership that would make the aircraft viable.

The Search for Solutions

Russia, accordingly, has been considering other solutions to safeguard its defense sector and improve its overall industrial performance. One possible remedy centers on what amounts to burden sharing across sectors. In this, the country is looking to harness the defense industry's strengths for civilian production, similar to the way Western enterprises such as Boeing or Airbus operate. By producing non-military products for domestic and foreign civilian markets, Russian defense manufacturers could sustain themselves even if their military goods are earning less revenue.

Unfortunately for Russia, the chances that such a gambit will succeed are low — even for domestic consumption. Although Moscow has been pushing an import substitution program amid the West's sanctions, Russian firms continue to privilege foreign, instead of domestic, components. In 2018, 38 percent of Russian industrial enterprises purchased equipment from abroad; two years before, the figure was just 6 percent. Ultimately, if Russian arms producers are failing to find sales for defense customers at home, they're unlikely to find any more of a domestic civilian market for their wares.

As a great power, Russia has lofty ambitions for the modernization of its military. Budget constraints, more competition from elsewhere and other issues, however, mean many of the army's most ostentatious projects never make it past the showroom. And moving forward, the Russian defense industry's plight is unlikely to improve as it faces a vicious circle that is leaving it worse for wear.

Russia's Defense Industry Finds Itself in a Tailspin is republished with the permission of Stratfor Worldview, a geopolitical intelligence and advisory firm. This article first appeared several years ago and is being republished due to reader interest.