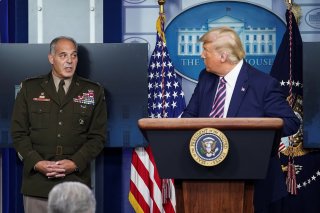 The chief operating officer of Operation Warp Speed, the federal government’s project to develop a COVID-19 vaccine, said Tuesday he thinks about his own family in giving his assurances that any such vaccine will be safe.

Perna said he had 100% confidence the vaccine will be safe.

“We will make sure that we will follow the science to that end. We will not distribute vaccines that are not determined safe and effective. You can take my word for that,” the general said.

Perna was joined for the event by Dr. Matthew Hepburn, head of vaccine development for Operation Warp Speed, who said the team acknowledges and appreciates the public’s concern.

“This is why we don’t cut corners. This is why we maintain the highest ethical, quality, and regulatory standards, and that we are transparent throughout the process so we can create a sense of confidence, so that what we know is being communicated publicly so that people can make the decision about these vaccines,” Hepburn said.

He said that after getting the vaccine, people will be checked on for two years.

“Ultimately, though, we are not only saying we are looking at these vaccines in the short term for clinical trials, but as part of the regulatory process, the Food and Drug Administration is providing guidance in terms of how will we follow these people out for the longer term,” Hepburn said. “That, like for any other vaccine, we are meeting that highest standard.”

To date, the disease has been responsible for the deaths of more than 226,000 Americans. The pandemic led to shutting down the U.S. economy and massive government spending.

Health and Human Services Secretary Alex Azar said the vaccine should be ready by January.

The operation is aimed at delivering 300 million doses of COVID-19 vaccine by January. Congress allocated $10 billion to the effort.

Trump called on Perna to be the chief operating officer of the effort when the general was just six months away from retirement. He leads the effort along with Dr. Moncef Slaoui, the chief scientific adviser.

In response to a question, Perna said that a possible change in administrations in January should not disrupt the work Operation Warp Speed is doing.

The general explained that the government will be relying heavily on the private sector for distribution and delivery of the vaccine to customers, with participation from Walmart, CVS, Walgreens, and other retailers that have pharmacies.

“Let’s assume we have quantities of vaccine ready to go upon FDA approval. What is next? It goes without saying that it will be the distribution of vaccines across all of America to include territories, and major cities, large metropolitan areas,” Perna said.

It’s just a herculean task on its own. We thought through the process through as many courses of action, but at the end of the day, I’ve made the decision that we were going to utilize the commercial industry that was most capable of implementing this task. There were three large companies, all capable, playing a role in vaccine distribution, as well as therapeutic distribution.

The clinical trials are large scale, which has allowed the process to move so quickly, but the government and its pharmaceutical partners still need additional volunteers, Hepburn said.

He added that another trial has had almost 40,000.

“What that shows you is that, for me, over 60,000 Americans have decided to say, ‘I will volunteer … I’m going to do my part in fighting this pandemic,’” Hepburn said, adding that still other trials “need another many thousands of volunteers for each one.”