Oshkosh Defense's Plan for the OMFV: Use Partnerships to Compete 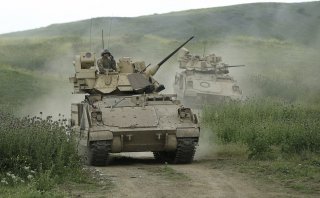 Here's What You need to Know: Part of Oshkosh Defense’s OMFV strategy has been to assemble a team of vendors with specialized expertise, such as Pratt & Miller, Rafael and QinetiQ, among others.

Oshkosh Defense is primarily known for medium tactical vehicles such as the Joint Light Tactical Vehicle and blast-deflecting Mine-Resistant Ambush Protected All-Terrain Vehicle. But now it is preparing to develop weapons geared toward heavy combat. The company is one of five major contractors working under an Army contract to build the new Optionally Manned Fighting Vehicle (OMFV), which is a future infantry carrier to replace the Bradley Fighting Vehicle and propel mechanized armor combat into a new era of lethality and major-power competition.

As far back as fifteen years ago, Oshkosh Defense was working on innovative technology intended to add “bolt-on” armor kits to the cab sections of its Heavy Expanded Mobility Tactical Truck to build in flexible options for commanders. Part of Oshkosh Defense’s OMFV strategy has been to assemble a team of vendors with specialized expertise, such as Pratt & Miller, Rafael and QinetiQ, among others. Additionally, the Oshkosh Defense OMFV design includes the use of the Northrop Grumman Bushmaster XM813 thirty-millimeter cannon.

“We augment through partnership,” Pat Williams, the vice president and general manager of Army and Marine Corps programs for Oshkosh Defense, told the National Interest.

Williams said Oshkosh Defense developers worked with team members to engineer the cannon and fire control system with an integrated ammunition handling system with its own motor, closed link configuration

“Ammunition and weapons system handling can have separate motors,” Williams explained. “Now you don’t have to worry about synchronizing the motors because the cannon motor is synchronized.”

The base of the turret is a remote weapons station that allows soldiers to identify targets and attack from beneath the protection of armor, Williams explained. Other innovative technologies included in the Oshkosh Defense design, which developers emphasize are subject to Army direction as requirements evolve, include redundant built-in sensors within both visual and thermal spectrums. The fire control system is built with a “lock-in” on target capacity and enabled by 360-degree secondary weapons sights to expand targeting purview.

Many of the details of Oshkosh Defense’s design are proprietary, competition sensitive or unavailable for security reasons. Still, the company is focused on wanting to succeed in implementing the Army’s vision for the tank. Clearly, this includes recognizing that, particularly during the current digital design phase, requirements, weapons specifics and specific performance parameters are all likely to fluctuate as the vehicle moves into its next phases of development.