Our Brains Perceive Our Environment Differently When We’re Lying Down 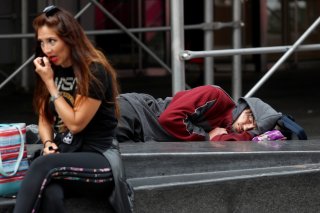 You’re agitated by the sound of a mosquito buzzing around your head. The buzzing stops. You feel the tiny pinprick and locate the target. Whack! It’s over.

It’s a simple sequence, but it demands complex processing. How did you know where the mosquito was before you could even see it?

The human body is covered in about two square metres of skin, but somehow even before looking you knew the precise location of the spindly predator. After visual confirmation, your hand found its way to the scene of the crime and applied fatal force to the bug, but you didn’t hurt yourself in the process.

What did it take for all that to happen? Good question.

For all the advancements the world has seen in every field of science, including neuroscience, the mechanics of perception and thinking still elude complete understanding.

Even the list of basic human senses is still up for debate: beyond the five traditional senses, many argue that balance — the body’s mechanism for orienting itself in space — should have been included long ago.

Balance while lying down

My colleagues and I at McMaster University have recently uncovered a wrinkle in our perception, which is allowing us to learn more about how that sense of balance works and how much it contributes to our perception.

The wrinkle is this: when we lie on our sides, the brain appears to dial down its reliance on information related to the external world and instead increase reliance on internal perceptions generated by touch.

When people lie on their sides, their performance also improves with the hands crossed.

On its own, this information is not likely to affect daily life. But the fact that this difference exists is very meaningful in our quest to understand how we orient ourselves to the spaces we inhabit, and it may open avenues for discovery in other areas, including sleep, for example.

Our experiment was, in a way, quite straightforward.

We tested sighted and blindfolded research participants’ ability to identify which hand we were stimulating first with their hands crossed and uncrossed. We have been doing similar experiments in our lab for about 20 years.

In this case, the results were consistent with what we’d seen in other experiments: participants’ performed then their hands were crossed. The novel manipulation here was when participants lay on their sides; when their hands were crossed we saw a drastic improvement in the ability to localize the touch. Like blindfolding, lying on the side reduced the influence of the external representation of the world and allowed participants to pay attention to their body-centred signals.

This difference, between doing the task upright and lying down, which we describe in Scientific Reports, leads us to wonder if the brain deliberately dials down the most active orientation functions — the external representation — when we lie down, possibly as a way to help us sleep.

The discovery leads us to want to know more about the role the body’s vestibular system appears to play in shaping our overall perception. In our inner ear, we have a little bit of ocean that came with us when we evolved from the sea. We carry it around to assess gravity, so we can tell which way is up. Issues with this system can cause disorders such as vertigo.

Showing that the brain shifts its reference point toward interior perceptions whenever we lie on our sides, confirms that the brain is deliberately dimming the vestibular system, highlighting the importance of its contribution to our normal perception.

There has been surprisingly little research on how the vestibular system influences input from other senses. Consider this: MRI machines test people when they’re lying down and MRI results inform conclusions about what is happening in people’s brains, when in fact their brain activity might look quite different if they were sitting or standing.

This discovery indicates that the vestibular system shapes perception even in different senses. This raises questions that border on the philosophical: How are we aware of the environment around us? What are the components of consciousness?

We can take our bodies for granted, regarding them as machines for carrying us around, but our bodies themselves actually shape the way we perceive and understand the world.

Try thinking about that next time you’re lying down.