Out Front: How H.R. McMaster Clinched Victory at the Battle of 73 Easting 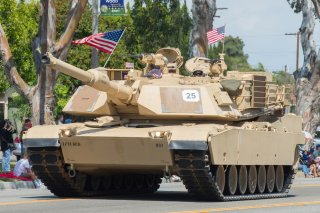 Here’s What You Need to Remember: “Leadership,” Macgregor bellowed. “Rommel—who was the commander of the entire German Army in Africa—led from the front. Gentlemen, our men deserve nothing less. There is no substitute for leading this way. I will be up front and I expect you to be there as well!” Days later we saw first-hand the chaos and unpredictability of war—and we witnessed Macgregor and McMaster both living out every word of their combat gospel: at the front, under enemy fire, and in charge!

Twenty-eight years ago this month I was at the Grafenwoehr training center in Germany where my unit, Eagle Troop of the 2nd Squadron, 2nd Armored Cavalry Regiment (2nd ACR), was conducting a series of field maneuvers and live-fire exercises. The 2nd ACR was one of three cavalry regiments then providing frontline defense against the Warsaw Pact, patrolling the borders between West and East Germany in the north and West Germany and Czechoslovakia in the south.

The Warsaw Pact nations, anchored by the Soviet Union, had more than fifty thousand tanks and millions of troops. Based on the terrain in Central Europe, there was always the risk communist forces could come flooding across a large plain known as the Fulda Gap and potentially defeat the nations of Western Europe. The 2nd ACR was charged with defending the central part of the border, and as such, equipped with hundreds of M1A1 Abrams Tanks, Bradley Fighting Vehicles, mechanized artillery cannons, and attack helicopters.

Before we left our assembly areas for the operation, however, something happened halfway across the world that distracted us from our preparation. Saddam Hussein, the dictator of Iraq, had actually done what we feared the Soviets might do: he sent hundreds of tanks and other armored vehicles flooding across their southern border with Kuwait in an unexpected attack and quickly subdued the Kuwait military. At the end of the operation, Iraqi tanks were a mere three miles from the Saudi border—representing a dagger at the throat of the oil supply on which most of the Western world depended.

More than once I remember looking around at my fellow Eagle Troopers and wondered which twelve or thirteen of our 135-man troop might never come home—or if I would ever come home. Despite this sobering expectation, however, there was no fear or timidity in Cougar Squadron (as 2nd Squadron was known). Macgregor and McMaster had prepared us so well that when the time to attack came, we were not merely “willing” to engage enemy armor, we thirsted for it.