From Outlier to Olympic Sport: How Skateboarding Made it to the Tokyo Games 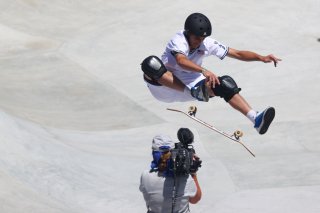 If organizers could script skateboarding’s Olympic debut, they’d likely change very little about what unfolded in Tokyo. Hometown skater Yuto Horigome, who honed his craft on the streets of Tokyo, won the discipline’s inaugural gold medal in the men’s street competition.

The next day, 13-year-old Momiji Nishiya won Japan’s second skateboarding gold, finishing atop the podium in women’s street style to become the nation’s youngest ever Olympic gold medallist and the third youngest in the history of the Games.

And the Japanese domination continued in the women’s park event, when Sakura Yosozumi took the gold and 12-year-old Kokona Hiraki won silver.

Many people may find it strange to see skateboarding in the Olympics. And that’s not a slight on the skill or talent required to compete as an elite skateboarder — it’s strange because of skateboarding’s long history as a counter-cultural activity.

Don’t let yourself be misled. Understand issues with help from experts

To participate in the Olympics, a sport needs an international federation that adheres to the Olympic Charter. Yet, it’s hard to imagine that some, if not most, skaters don’t scoff at Rule 1, which lays out the “supreme authority and leadership of the International Olympic Committee.”

What unfolded at Tokyo 2020 is just a small sliver of an activity, typically celebrated and cherished as a form of resistance against mainstream culture. Indeed, in its most basic form, skateboarding is still a quintessentially counter-cultural activity.

Skating as we know it today evolved primarily in the 1970s and 1980s, when innovators like Mark Gonzales (Street), Rodney Mullen (Street), and Tony Alva (Vert) were experimenting with new ways of using skateboards.

In the mid-1970s, purpose-built skate parks dotted America’s urban landscape. Competitions existed, but there was little money to be made. Skating was about camaraderie, creativity and personal expression.

In a 2018 article for Vice, Cole Nowicki describes skateboarding as an art. Like so much art that came before it, skateboarding stood in opposition to prevailing notions of appropriate leisure and recreation.

In an America dominated by sports with strict rules and regulations and confined to a stipulated playing field, skateboarding offered beautiful, unstructured freedom. There were no scores. No stadium. No limits. Improvisation was celebrated, not castigated.

There was little money in early professional skateboarding. Competitions paid virtually nothing. Skaters filmed “parts” demonstrating their abilities, hoping to gain a modest sponsorship from industry-specific companies. When John Cardiel was named the 1992 Thrasher Magazine Skater of the Year, for example, he was only earning $500 a month as a professional skateboarder.

From margin to mainstream

The popularity of skateboarding eventually caught the attention of folks with deep pockets. In 1995, ESPN staged the first X-Games, encompassing skateboarding and eight other “extreme” sports.

Skaters first really took notice of the IOC when it staged a hostile takeover of snowboarding for the 1998 Nagano Olympics. As Dvora Meyers recently highlighted in Vice, the IOC flexed its organizational muscle by rejecting the already established International Snowboarding Federation (ISF) — the group truly responsible for the global spread of the sport — moving snowboarding under the umbrella of the Fédération Internationale de Ski (FIS). Rival FIS events were staged, forcing snowboarders to choose sides, resulting in the collapse of the IFS in 2002.

After enduring immense hostility from within snowboarding for its treatment of the IFS, the IOC moved rather more carefully when incorporating skateboarding into the 2020 Games. Although it looked like the IOC might hand jurisdiction over skateboarding to the International Roller Sports Federation, a merger with International Skateboarding Federation was ultimately secured, producing the IOC-recognized federation World Skate.

The skateboarding community is split over their pastime’s incorporation into the Olympics. In 2016, shortly after the IOC announced that skateboarding was joining the mega event, Thrasher Magazine reached out to 33 professional skaters for their opinion on the arrival of Olympic Skateboarding. Responses ranged from excitement to revulsion.

For many skaters, competition is an afterthought. Take John Cardiel, for example. Hailed as a legend in the skate subculture, Cardiel was known for his high-speed style and daredevil risks. His reputation evolved on the ground, by seeking out the most challenging and interesting landscapes he could skate. His “part” tapes remain popular and, although he was a sponsored professional, he views skating as something more than a sport.

“To me, skateboarding is all about individuality and originality,” Cardiel told Thrasher. “It has nothing to do with highest, furthest, longest. Skating being an Olympic sport contradicts everything that I believe skateboarding to be.”

Cardiel’s career peaked in the 1990s before skateboarding was thoroughly commercialised via the X-Games and comparable events. But for skaters that rose to prominence in the 2000s, like American Olympian Nyjah Huston, the Olympics is another opportunity to expand the sport.

Huston has won 12 X-Games gold medals and four world championships and his view of the Olympics couldn’t be more different than Cardiel’s: “I’m excited about the opportunity to be able to skate in the Olympics! Whether people like it or not, skateboarding is bound to grow into bigger things like this sooner or later. So, in my eyes, it might as well be now.”

2017 Vans Park Series World Champion Nora Vasconcellos has spent her young career balancing competition with the more traditional “part” videos that made Cardiel an icon of the sport. Although women skated from the beginning, opportunities have lagged behind the men. Vasconcellos hopes that the Olympics can help improve the lot of female skaters.

“I don’t care because skateboarding will always be skateboarding to me,” Vasconcellos told Thrasher. “If anything, it’s good because as women skaters we now have more contests to go to and travel opportunities. It totally changed snowboarding for the women. Once snowboarding was in the Olympics, women snowboarders were really able to just live off putting out video parts. The more girls who are making a living skateboarding, the more diversity there can be.”

The IOC’s interest in skateboarding, of course, is financial. Like a greedy vampire, it scans the sportscape in search of popular, youthful sports, capable of revitalizing its viewership. It will be up to the athletes to use the creativity, daring, and camaraderie skateboarding is known for to resist from the inside and preserve what they can of the skater subculture, lest the sport and art be separated, forever.