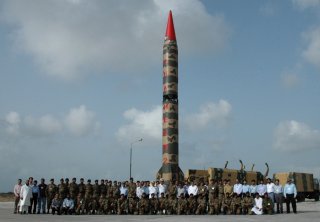 Here's What You Need To Remember: Pakistan is clearly developing a robust nuclear capability that can not only deter but fight a nuclear war. It is also dealing with internal security issues that could threaten the integrity of its nuclear arsenal. Pakistan and India are clearly in the midst of a nuclear arms race that could, in relative terms, lead to absurdly high nuclear stockpiles reminiscent of the Cold War.

Kyle Mizokami is a defense and national-security writer based in San Francisco who has appeared in the Diplomat, Foreign Policy, War is Boring and the Daily Beast. In 2009, he cofounded the defense and security blog Japan Security Watch. You can follow him on Twitter: @KyleMizokami. This first appeared several years ago and is being reposted due to reader interest.