Part Battleship, Part Carrier: The Lost History of the "Battlecarrier" 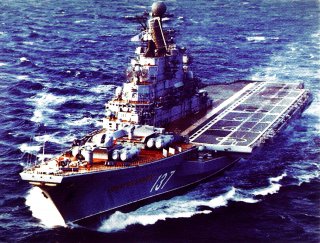 Here's What You Need to Know: The U.S. Navy came to the conclusion that is was better to have battleships concentrate on firing massive artillery shells at the enemy rather than taking on multiple operational roles.

The battleships were modernized to include cruise missiles, ship-killing missiles, and Phalanx point-defense guns. Returned to the fleet, the ships saw action off the coasts of Lebanon and Iraq. At the end of the Cold War, the battleships were retired again. All were slated to become museums.

A Hole in the Navy

In the early 1980s, the Reagan Administration began an ambitious shipbuilding program. It was decided to yet again bring back the four Iowas. In phase one, the ships were modernized with the addition of Tomahawk land attack missiles, Harpoon anti-ship missiles, and Phalanx defense guns. By the mid-1980s, all four had returned to duty.

Today the naval gunfire argument rages on. Even in the age of drones and precision warfare, there are still occasional calls to bring the heavily manned, imprecise Iowa class back to service. There’s a certain romance to battleships, and having four Iowas sitting around in good condition has beguiled naval enthusiasts and planners for more than 60 years with schemes to bring them back.

The upcoming Zumwalt-class destroyers will go a long way towards providing battleship-quality naval gunfire support for the Marines. Minimally manned, relatively small, stealthy, and precise, the Zumwalts are the antithesis of the Iowas, but functionally their successors.