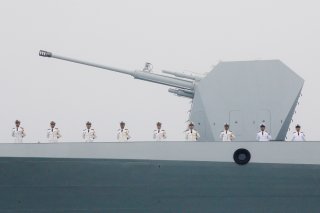 One word can probably describe the way Chinese media has been talking about the Type 055 destroyer: one-upsmanship.

Everything from the amount of VLS cells to the displacement weight has been hyped up as being larger and better than the competitors. Even the size of the Type 055 has lead some Western analysts, such as The Military Balance, to see it as a cruiser and not a destroyer. But what role will the Type 055 play in the People’s Liberation Army Navy (PLAN)?  And how does it match up against the region’s other destroyer heavyweights?

The biggest talking point of the Type 055 in popular outlets is its massive VLS array. While the American Arleigh Burke-class and the Japanese Atago-class have a 96-cell Mk41 VLS, the Type 055 sports a 112-cell VLS. This VLS is considered to be properly multirole similar to the Mk41, capable of launching a wide variety of missiles unlike earlier Chinese VLS on the Type 052C destroyer, which were only capable of launching surface to air missiles (SAMs). The Type 055 is only overshadowed by South Korea’s new Sejong the Great-class destroyers, which have 128 multirole VLS cells, and Russian and American cruisers. However, the armament inside the Type 055’s VLS is still inferior to that of the Arleigh Burke-class destroyers. At the moment, the first of the Type 055 VLS is only listed as firing HQ-9B anti-aircraft missiles, YJ-18A anti-ship missiles, and CJ-1000 land attack cruise missiles, with the possibility for Yu-8A anti-submarine missiles. While rumors have flown about them also being equipped with quadpacked DK-10 surface to air missiles, their equivalent of NATO’s Enhanced Sea Sparrow Missile (ESSM), there is no confirmation of this system being integrated into the Type 055. In contrast, the quadpacked ESSM is already a mature weapon deployed in the Mk41 VLS on the Arleigh Burke-class and many other NATO ships. This allows ESSM-equipped ships to get more “shots” per VLS cell. Also uncertain is the ability for the Type 055 to take on a BMD role. While the official PLAN announcement of the Type 055 includes a mention of anti-missile capability, most analysts seem to agree that this is largely anti-cruise missile, and that the ballistic missile defense capability of the Type 055 is limited at best. This stands in contrast to the South Korean and Japanese destroyers, both of which have full AEGIS BMD capability.

Another area where the Type 055 seems to have a marked improvement over its predecessors is in systems integration. While the details are vague, statements from PLA mouthpieces have described the Type 055 as being able to “integrate various information receiving from the space, air, water surface, and underwater” While this could be something like the Naval Integrated Fire Control-Counter Air that will be integrated into the Arleigh Burke-class (which allows Arleigh Burke-class ships to fuse sensor data and even hand off engagement control with many other platforms such as AWACS), it’s unlikely. Rather, it seems to be focused on the Type 055’s potential role as the flagship of a naval task force, directing the engagement and providing targets to the Type 052D destroyers it’s likely to operate with. The Type 055 also has increased cruising range according to some Chinese military observers, which would allow it to act as an escort to the new carriers.

So what does this mean for the United States and its Pacific allies? While the Type 055 definitely represents a great step forward in capability for the PLAN, especially in its ability to build large ships, the United States and it’s regional partners still possess a qualitative and quantitative advantage over the PLAN when it comes to high end destroyers. Both Japanese and South Korean destroyers use the mature AEGIS radar system, integrated with advanced ship to ship missiles of regional design (the Type 90 SSM for the Japanese and Haesong SSM for the South Koreans). The Japanese and Americans also have a proven short-to-medium range VLS launched missile in the ESSM, a capability that the Type 055 lacks at the moment. In numbers, currently three South Korean Sejong the Great­-class destroyers and two Japanese Atago-class destroyers are active. Only one Type 055 has been completed. While the Type 052D destroyers are more numerous, with only 64 VLS cells and limited systems they are not on the same class as a modern AEGIS destroyer.

What is uncertain though is if the United States, South Korea, and Japan can keep up with the Chinese shipbuilding industry. Four more Type 055s are currently being built, which would bring the number of Type 055s up to five. With the Type 055, China has proven that it can build ships that are nearly up to the Western standard. With the resources at its disposal, China could very well field a technically mature fleet in a short period of time. Combined with the completion of their first carrier, the PLAN appears to be modernizing very rapidly. While the Type 055 itself is no wonder ship, it heralds a new era of advanced Chinese shipbuilding, nearly on par with Western powers.

Charlie Gao studied political and computer science at Grinnell College and is a frequent commentator on defense and national-security issues. This article first appeared in November 2017.