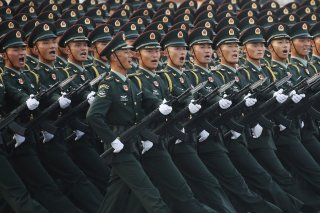 Here's What You Need to Remember: The 2021 report explicitly describes China’s goals as seeking to “match or surpass U.S. global influence and power, displace U.S. alliances and security partnerships in the Indo-Pacific region, and revise the international order to be more advantageous to Beijing’s authoritarian system and national interests.”

Last week, the Pentagon released its 2021 China Military Power Report, an annual review of military and security developments in China. The report includes a number of updates on last year’s version — here are five top items to take note of:

1. Nuclear advancements: Whereas the 2020 report surprised many by estimating that China’s stockpile of nuclear warheads was in the low 200s, the 2021 version states: “The accelerating pace of the PRC’s nuclear expansion may enable the PRC to have up to 700 deliverable nuclear warheads by 2027. The PRC likely intends to have at least 1,000 warheads by 2030.” In addition, China “is implementing a launch-on warning posture, called ‘early warning counterstrike.’” The report notes that “China has commenced building three solid-fueled ICBM silo fields, which will cumulatively contain hundreds of new ICBM silos.” These developments place China “on the cusp of a large silo-based ICBM force expansion comparable to those undertaken by other major powers.” Furthermore, “The PRC is also supporting this expansion by increasing its capacity to produce and separate plutonium by constructing fast breeder reactors and reprocessing facilities.” In sum, these changes suggest that Beijing is reshaping its nuclear posture, with significant implications for both nuclear and conventional escalation dynamics.

3. Overseas capabilities: For the first time, the 2020 report specifically identified places China might be considering for potential bases and logistical hubs. This year’s report highlights legal changes and military developments aimed at advancing China’s overseas influence. It notes that a revision to the National Defense Law “tasked the PLA with defending ‘overseas development interests.’” The report also highlights China’s expeditionary capability, noting the rapid development of “a limited capability to project ground power as an expeditionary force . . . [including] to speed up its transition from regional defense to trans-theater operations.” Platforms like ocean-going amphibious transport docks, the Liaoning and Shandong aircraft carriers, and the 2020-commissioned Renhai-class cruiser are key to building out China’s power projection capabilities. These capability changes reinforce our expectation that China will accelerate development of power-projection systems in coming years.

4. Cross-strait tensions: The 2021 report finds that China is expanding its forces and capabilities relevant to military operations against Taiwan. The total number of active-duty army personnel was the same in 2020 and 2021, but this year 4,000 more are reportedly stationed near the Taiwan Strait. China increased its landing ships and amphibious transport docks by 20, with 49 of 57 stationed near Taiwan. The report also notes that China has 15 more submarines (diesel attack, nuclear attack, and ballistic missile versions) than last year. Finally, China has increased its fighters by 100 overall. In addition, the report comments that Chinese leaders believe “advanced technologies, such as cloud computing and big data analytics, are changing the future of warfare faster than expected.” China is seeking to use these capabilities to alter the military balance across the Taiwan Strait and beyond.

5. China’s objectives: Last in this list, but certainly not least, is a reframing of China’s objectives. The 2021 report explicitly describes China’s goals as seeking to “match or surpass U.S. global influence and power, displace U.S. alliances and security partnerships in the Indo-Pacific region, and revise the international order to be more advantageous to Beijing’s authoritarian system and national interests.” The report goes on to emphasize that China’s leaders view the competition in ideological terms and warns that they “are increasingly willing to confront the United States and other countries in areas where interest[s] diverge.” Tensions between the United States and China continue to grow, and exchanges have been made more difficult by the COVID-19 pandemic. These factors are to blame for a steep decline in US-China military exchanges, which fell from 18 last year to four this year. Overall, the 2021 China Military Power Report paints a picture of a country that is growing more capable militarily while also adopting a more risk-acceptant posture.

This article was first published by the American Enterprise Institute in November 2021 and is being republished here due to reader interest.