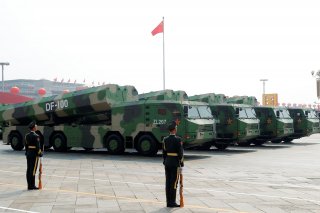 The rapid deterioration of the U.S.-China relationship makes understanding China’s approaches to military strategy and nuclear deterrence all the more pressing. The Department of Defense (DoD) annual report on China’s military power offers a helpful snapshot for policymakers and analysts to keep tabs on how the U.S. military assesses China’s military plans, intentions, and strategy.

The nuclear section of the latest DoD report, which was released yesterday, contains several important pieces of information about China’s nuclear arsenal and approach to deterrence. Some of this information undercuts the threat inflation proffered by high‐​ranking officials in the Trump administration, while other bits of information paint a concerning picture about potential sources of U.S.-China nuclear instability.

Unlike past DoD reports on China, the 2020 report provides an estimated number for China’s total nuclear warheads, placing the count in the “low 200s.” This estimate is lower than open source estimates that place the warhead count closer to 300.

The starting number is important because administration officials have repeatedly warned that China wants to double the size of its nuclear arsenal over the next ten years. Past U.S. predictions of large increases to China’s nuclear arsenal have been proven false so it would be wise to take current warnings of doubling with a grain of salt. But even if the DoD is correct this time around, a doubling from a lower baseline estimate represents a less significant threat to the United States than a doubling from a higher baseline. Even if China doubles from the higher estimate of 300 warheads, it will pale in comparison to the more than 1,300 deployed U.S. nuclear warheads.

Baseline warhead estimates and allegations of doubling it in ten years may sound like Dr. Strangelove‐​like minutiae, but it has real consequences for U.S. military planning and arms control. China’s nuclear ambitions have seeped into the Trump administration’s negotiations with Russia to extend the New START agreement, which caps Russian and U.S. strategic nuclear warheads, by demanding that Moscow convince Beijing to come to the negotiating table or risk the deal collapsing. Senior administration officials have repeatedly invoked the “doubling in ten years” line in this arms control context to inflate the threat of China’s nonparticipation in New START‐​style warhead caps.

The Bad: Launch on Warning

More concerning, however, is the DoD report’s claim that China might be shifting to a launch on warning (LOW) nuclear posture. The report states that China is expanding the number of nuclear missiles based in stationary silos, which are more vulnerable to attack and destruction than mobile missiles carried by trucks or in submarines. Recent improvements to China’s early warning systems make a LOW posture possible via early detection of incoming attack, thereby allowing Chinese units to launch their missiles before they are destroyed. The 2020 report argues that China would not be increasing its stock of vulnerable, silo‐​based missiles unless it had a LOW system in place to offset the increase in vulnerability.

The report’s evidence for China shifting to LOW is thin, but Chinese policymakers and strategists alike have expressed concern about the tension of maintaining a small nuclear arsenal that can be an effective deterrent. Advances in both U.S. missile defense capabilities and rapid, conventional strike are especially worrying to Beijing because they allow Washington to reduce the survivability of China’s nuclear arsenal without using nuclear weapons.

Moving to LOW is one way to address this tension while technically adhering to China’s long‐​held no first use of nuclear weapons policy—under LOW China is still being attacked first, it’s just getting a retaliation strike off before it suffers damage. However, LOW also reduces time for decision making. The whole point of LOW is to fire missiles before they can be taken out, but there are only minutes to give a launch order if an incoming strike is detected. The United States and Soviet Union adopted LOW postures for most of the Cold War, which experienced several accidental detections or system malfunctions that could have triggered a major nuclear exchange by accident. China moving to LOW would not exactly replicate this Cold War problem, but it would make any crisis or conflict between the United States and China more dangerous by increasing the risk of accidental escalation.

The United States could reduce some of the risks associated with China’s potential shift to a LOW posture by thinking carefully about its military strategy toward China. The LOW temptation is in large part due to the U.S. approach to warfare that could hold Chinese nuclear forces at risk without using U.S. nuclear weapons. The conventional threat to China’s nuclear forces could easily grow now that the United States has left the Intermediate‐​range Nuclear Forces Treaty, which frees it to deploy longer‐​range, land‐​based missiles in East Asia. If these future missiles target Chinese military installations that are deep in the center of the country, then Beijing will face a strong incentive to move more of its nuclear force to a LOW posture.

The 2020 DoD report on China’s military power should be applauded for the level of detailed, unclassified information it presents on China’s nuclear forces and approach to deterrence. Understanding China’s nuclear strategy is the first step toward crafting U.S. policies that prevent a nuclear exchange between the two countries as their general relationship sinks deeper into acrimony and the risk of armed conflict increases.

While the lower warhead estimate is welcome news, China shifting to a LOW posture would not be in America’s interest. Military planners in Washington should seriously consider how the U.S. approach to conventional warfighting interact with Chinese nuclear thinking if they want to develop strategies that deter while minimizing the likelihood of accidental or inadvertent nuclear escalation.