Peru Just Had 3 Presidents in a Single Week. Confused? 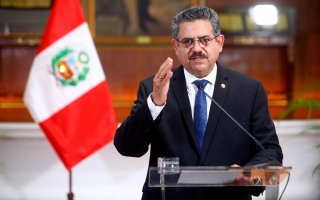 Peru has capped off a particularly tumultuous period, in which the country saw three different presidents in just one week. Francisco Sagasti of the Purple Party has been selected by Peru’s unicameral legislature as a caretaker president until elections in April 2021. The game of musical chairs played by Peru’s leadership, now and throughout the country’s recent history, serves to highlight the importance of enumerated checks and balances and consolidated political parties. If it is unable to achieve either, Peru risks further chaos.

On November 9th, Peru’s Congress voted overwhelmingly to impeach President Martín Vizcarra, one of the most popular presidents in its modern history. The move accentuated Peru’s long-running constitutional crisis. In an epic clash between the presidency and congress, Vizcarra’s popular anti-corruption campaign had earned the ire of many in congress, where 68 members are currently under investigation for crimes ranging from graft to homicide. The proximity of these investigations to those in power and the prospect of anti-corruption reforms appear to have consolidated the vote in Peru’s congress for impeachment where previous attempts at the same had failed. Vizcarra’s impeachment elevated Manuel Merino, the head of the legislature, to the role of interim president.

Peru’s turbulence is all the more alarming given its strong economic performance in the past decade and a half, as well as the severity of its current coronavirus outbreak. Bolstered by market-driven and export-led growth on the back of trade agreements with the US, the European Union, and China, Peru grew at the fastest rate of any large Latin American economy from 2003-2019. As a result, poverty declined precipitously. Buffeted by a severe COVID-19 outbreak, however, the impressive gains of Peru’s economic miracle are in peril with an economy that, according to the International Monetary Fund, could contract 14 percent this year — also the fastest rate of any large Latin American economy.

The country’s laudable economic development has not been matched by the art of stable governance. One of the principle sources of Peru’s instability rests in a lack of institutional checks and balances. A lack of well-articulated checks and balances has created a vacuum of power, in which a capacious reading of the country’s impeachment clause has taken hold — a fate that has befallen at least three of Peru’s presidents since 2000. Peru’s constitution permits the impeachment of a sitting president on the basis of “moral incapacity,” a term that has proven sufficiently capacious to become the perfect vehicle of congressional abuse.

Indeed, at its current rate, Peru risks normalizing impeachment as the response de rigueur to the periodic (and natural) frictions between the executive and legislative branches. The constitutional structure almost incentivizes it, as the president of the legislature can ascend to power through the impeachment process. This was the case with Manuel Merino, the opportunistic head of the legislature who turned president for mere days after spearheading Vizcarra’s impeachment. (He later resigned under pressure.)

Yet the problem runs deeper than constitutional design. As New York University political scientist Patricio Navia points out in recent analysis, Peru consolidated democracy in the late 1990s without a consolidated party system. This has manifested itself predictably — every president elected since Peru’s return to democracy has been either an outsider or a member of a party that did not field a candidate in the previous election. The upcoming presidential election, which could draw dozens of candidates, is likely to follow a similar pattern.

Peru’s problem is not unique in Latin America; in fact, much of the region suffers from similar ills. Brazil, for instance, famously has one the most fragmented congresses in the world, where more than two dozen parties have representation. (Recent reforms aim to raise the threshold for representation and reduce the number of political parties in Brazil.) Often, voters and civil society groups exacerbate this problem with a preference for outsider candidates and new parties over more establishment figures.

For Peru, rapidly cycling through three presidents in one week should be a wake-up call. Reforms to consolidate and reduce the number of political parties could be achieved by raising the barriers to party formation and representation in the congress, and new laws should enforce greater transparency in campaign finance to reduce the possibility of parties serving as vehicles for corruption. While it may be comforting to know that Peru has finally settled on an interim president to shepherd the country into 2021, if Sagasti is unable to advance any political reforms, an inability to think long-term and a congress that looks out only for itself both augur poorly for Peru’s recovery.