This Picture Means War: These Killer Missiles Could Sink U.S. Aircraft Carriers in a War 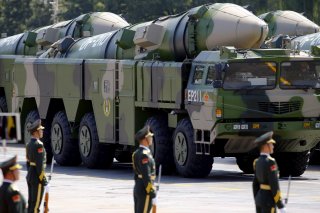 Col. Eastburn has it half right. Beijing clearly wants to coerce others. But the test was entirely consistent with its claim to want to bring peace to the region. It does want peace; it simply wants to transform the nature of that peace, and force is a means to that end. If Chinese Communist Party prelates in Beijing get their way, they—not foreign governments or international institutions—will make the rules in the South China Sea. They will issue laws or policy decrees mandating or proscribing certain actions in regional seaways, and others will obey. Peace will prevail.

The missile tests are the latest installment in China’s effort to put steel behind its claims to “indisputable sovereignty” over the waters, skies, and land features within the “nine-dashed line” it has sketched on the map of Southeast Asia. The nine-dashed line encloses some 80-90 percent of the South China Sea, including not just contested Spratly and Paracel islands, atolls, and reefs but also wide swathes of fellow Southeast Asian claimants’ “exclusive economic zones.” It’s worth noting, for instance, that Mischief Reef, one of the island bastions now festooned with missiles, lies deep within the Philippine exclusive economic zone. Beijing purloined it from Manila in the mid-1990s and progressively built the reef into the military fastness it is today.

China’s effort aims at imposing what the German sociologist Max Weber called a “monopoly of the legitimate use of physical force within a given territory.” This is the classic definition of sovereignty. A sovereign commands such a monopoly within borders drawn on the map. The government can enforce its will within national frontiers because it fields law-enforcement and military services that no one can oppose with realistic chances of success. What the sovereign says goes. Now Beijing is harnessing high-tech sensor and weapons technology in a bid to project the monopoly on force it wields on dry land far out to sea. If it can amass insuperable physical might at any place within the nine-dashed line, outclassed Southeast Asian rivals will have to stand down. They may never consent to China’s doctrine of indisputable sovereignty, but there may be little they can do about it. Might makes right.

Which is the point for Xi Jinping and his fellow denizens of the wretched hive of scum and villainy.

In a perverse way, though, China’s drive for sovereign rule is true to international custom. For centuries international law regarded the “territorial sea” as a seaward extension of the dry earth where a coastal state’s government was fully sovereign. The territorial sea’s width was three nautical miles. Why that seemingly arbitrary figure? Because three nautical miles was roughly the range of a cannon shot from the dawn of the gunpowder age until the twentieth century. Practically speaking, a government could exert physical control of waters within reach of gunfire belching out from coastal batteries. It could shoo away pirates, poachers, or hostile navies. It could exercise a monopoly on armed force within those waters—regulating what went on there just as if managing events on shore.

But the twentieth century brought advances in weapons technology that produced a leap in combat reach and precision. The DF-21D, according to most analysis, has a range of 1,500 km. The DF-26 has a range estimated at 3,000-4,000 km. If the territorial sea is that expanse where the coastal state boasts a monopoly of force, and if gee-whiz technology empowers a coastal-state military to exert that monopoly far offshore—far beyond the customary three nautical miles, or the twelve nautical miles codified in the law of the sea—then why shouldn’t such a state assert sovereignty within its weapons reach?

In short, Beijing is attempting to take the logic underlying the territorial sea to its nth degree. It has also reverted to the older view of the sea as physical space that the strong can own. What’s the solution for Southeast Asians, and for lovers of maritime freedom? Simple: if China is trying to build up a monopoly on force, deny it that monopoly. Simple to say, as Clausewitz might remind us, but in martial affairs the simplest thing is difficult. A solution would combine alliance building with military innovation. China may outmatch any single antagonist within the nine-dashed line, including that fraction of the U.S. Navy likely to appear in regional waters, but it might not outmatch them all if they made common cause.

Southeast Asians are reticent about bucking Beijing’s will. They know they will have to live with Big Brother forever, and they dread his wrath. That might change if powerful outsiders—the United States, Japan, Australia, Europeans—show themselves committed to preserving small states’ rights and privileges as well as freedom of the sea. Collectively they can push back even if no individual contender can.

And then there’s the problem of countering the Chinese missile threat. If regional and extraregional militaries fashion tactics and technologies that let them survive and operate within reach of Chinese missiles, then they will have blunted Beijing’s campaign to make itself sovereign within the nine-dashed line. If those who reject China’s purposes and methods stand together and learn to fight together in unison, they may yet prevail.

James Holmes is J. C. Wylie Chair of Maritime Strategy at the Naval War College and coauthor of Red Star over the Pacific. The views voiced here are his alone. This article first appeared in 2019 and is reprinted here due to reader interest.