This Picture Says It All: Two‐​Party Polarization Is a Threat to Liberty 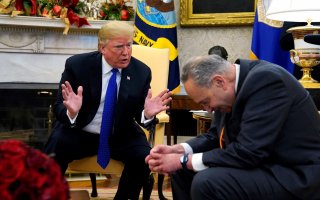 In the cover story for the July/​August issue of Cato Policy Report, Lee Drutman of the New America Foundation expounds on a theory of the causes of, and solutions to, hyperpartisan polarization, adapted from his book Two‐​Party Doom Loop: The Case for Multiparty Democracy in America. In the past two to three decades, America’s two major political parties have become strongly sorted and polarized in a way that has not been seen since the Civil War. The consequences have become alarming.

It’s not just that the political marketplace is broken — it’s that the broken political marketplace is now breaking the fundamental foundations of modern liberal democracy: the rule of law and adherence to constitutional norms. In the constant jockeying for narrow elusive majorities, partisans are putting short‐​term gains ahead of long‐​term stability and disregarding long‐​standing norms in order to win the next election and humiliate the other side. When “winning” becomes everything, and winning means dehumanizing the other side for short‐​term gain, it legitimates increasingly extreme behavior on both sides.

This is a problem that should be especially concerning to libertarians. Not only because we perennially struggle for a seat at the table as an ideological minority within both major parties, but because escalating partisan incentives have undermined things libertarians care deeply about: constitutional limits on government power, checks and balances, liberal norms, and an aversion to the tyranny of the majority.

Rep. Justin Amash (L-MI) noted similar reasons in his decision to leave the GOP last year, writing in the Washington Post that “The two‐​party system has evolved into an existential threat to American principles and institutions.”

That’s a dire warning that lovers of liberty should take seriously. But luckily, we are not without possible solutions.

The question is in some ways one of public choice, the incentives facing political actors because of systemic design and process choices. It’s also not new territory for political science, with Duverger’s law dating to the 1950s but the underlying observation long predating it. First‐​past‐​the‐​post elections (the only kind then known to the Framers of the Constitution) tend to sort a nation’s politics into two dominant political parties, and nowhere has this effect been seen more strongly than in the United States. Alone among major liberal democracies, the United States has no members of the House of Representatives who were elected outside of the two largest parties. (The Senate has two nominal independents, but both are de facto Democrats).

Libertarians are thus well positioned to draw on an intellectual tradition that stretches from Nobel laureate James Buchanan all the way back to James Madison, who strenuously sought to craft a system of checks and balances that would tame and channel partisan incentives, including through a strong system of federalism and decentralization. Simply put: incentives matter. The rules of the game go a long way toward determining its outcome. Madison’s genius continues to serve us well, but is not beyond improving on with knowledge unavailable to him in 1787.

Our situation is not hopeless and runaway polarization is not inevitable, as much as recent years might have given that impression. There is currently a bubbling movement for electoral reform sweeping the states, which have broad authority to determine the rules of their own elections. Maine has led the way with ranked choice voting, using it for congressional elections in 2018 and applying it to a presidential race for the first time this November. But there are other possibilities. Some states already use multi‐​member districts for their legislatures, which are especially well suited to many models of multipartisan electoral reform.

Since the Supreme Court’s ruling in Baker v. Carr in 1962, which struck down malapportioned districts that were once common for one or both chambers, legislative bicameralism in many states has struggled to find a purpose. With state senates effectively elected in an identical manner to their lower houses, they are no longer representing any difference of interests or incentives. One possible reform to consider would be making one house elected by a method of party list proportional representation, and thus explicitly multipartisan, and making the other chamber elected in single‐​winner nonpartisan elections, as the unicameral legislature of Nebraska already is.

But that’s just one idea. The field of possible electoral reforms is rich with possibilities, many of which have long standing examples abroad we can study. The state‐​level initiative and referendum process provides a key avenue to bypass established legislators entrenched within their two partisan camps. States can and should take the lead with experimentation. Perhaps in no other policy field is the label “laboratories of democracy” more apt.

By chipping away at the foundations of the doom loop at the state level, Americans might be able to find a more diverse and competitive market for political representation. And in so doing, we could find a way out of the toxic escalation of two‐​party tribalism, which in the long run provides no satisfactory defense of liberty and the Constitution. The American people represent a vast diversity of values, ideologies, and interests. Their elected representatives should reflect that, including building compromise and consensus rather than engaging in a fight to the death for total control built on narrow majorities.

There is strong reason to doubt how long our constitutional traditions and institutions can survive the two‐​party tug of war, which in its current unbounded incarnation is barely a generation old. We are overdue to do something about it before something breaks, potentially irrevocably. It is a testament to Madison’s vision that he not only attempted to tackle these same problems, but also provided us a workable way to correct and perfect his system, to better meet its goal of preventing the dominance of any one party or faction.

This article by Andy Craig was first published by the Cato Institute.