Pictures Don't Lie: The Javelin Missile Is As Bad Ass As It Looks 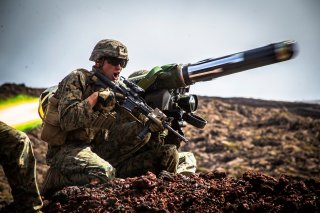 The Javelin has undergone quite a few upgrades since its initial deployment in 1996—let’s take a look at three of the most important ones.

The move to equip middle-weight personal carriers with effective anti-tank missiles mirrors Russia’s own moves to install deadly Kornet anti-tank missiles on the Epoch turret used in its new families of Bumerang, Kurganets, and T-15 Armata (not the T-14) armored personnel carriers.

The United States has sold Javelins both to many NATO countries, including France and the United Kingdom, allies in the Middle East such as Saudi Arabia and the United Arab Emirates and to Asian-Pacific countries including Australia, Indonesia, and Taiwan.