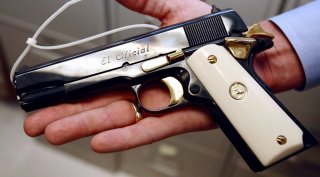 Here's What You Need to Remember: The 10mm Auto caliber is one of the few ported over to the 1911A1 platform, and the Delta Elite Rail is one of the few pistols in 10mm Auto. While the caliber will never find the success of Nine-millimeter Luge or even .45 ACP, the Delta Elite Rail serves a die-hard cadre of high powered semi-automatic pistol enthusiasts.

Kyle Mizokami is a defense and national-security writer based in San Francisco who has appeared in the Diplomat, Foreign Policy, War is Boring and the Daily Beast. In 2009 he cofounded the defense and security blog Japan Security Watch. You can follow him on Twitter: @KyleMizokami. This piece is being republished due to reader interest.