Playing Hardball With China Works in a "Constrainment" Strategy 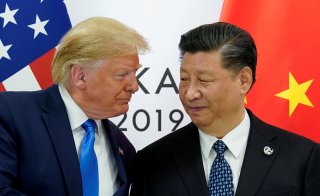 Global attitudes towards the People’s Republic of China (PRC) are hardening. In 2019, the European Union declared the PRC a “systemic rival” amid rising trade tensions.

In May 2020, the White House published a paper that described the US’s competitive approach to the PRC based on “principled realism”. One of the report’s key passages stated that the US government will: “Respond in kind to Beijing’s transactional approach with timely incentives and costs, or credible threats thereof.”

And on June 5, the Inter-Parliamentary Alliance on China (IPAC) was formed. Lawmakers from 11 countries, including the US, UK, Australia, Japan and Canada are now working “towards reform on how democratic countries approach China”. They seek to safeguard the rules-based international order, uphold human rights, promote trade fairness, strengthen security and protect national integrity.

All of these developments suggest that western China policy is rapidly changing. What remains unclear, however, is what exact form it will take.

In the past, western policy towards the Chinese Communist Party (CCP) was informed by two opposing camps. One group called for engagement with China, typified by German chancellor Angela Merkel. She has argued for continued dialogue and cooperation, regardless of President Xi Jinping’s increasingly totalitarian approach to governance.

The other group demanded China containment. The former Trump adviser Steve Bannon, for example, has called for the overthrow of the CCP.

But foreign and security policy regarding China should not be reduced to such overly binary and reductionist choices.

In the mid-1990s, the renowned international relations expert Gerald Segal suggested an alternative. He called it “constrainment”. Segal described this as a policy aimed at constraining the CCP, which intended to:

Tell China that the outside world has interests that will be defended by means of incentives for good behaviour, deterrence of bad behaviour, and punishment when deterrence fails.

At first sight, constraining authoritarian excesses of the CCP may appear rather difficult. It certainly requires western politicians to accept considerable political risks. Roland Paris, former foreign policy adviser to the prime minister of Canada, has rightly pointed out that while maintaining cooperation with Beijing in areas of mutual interest and “pushing back” at the same time is a “tricky policy to manage”, there is “no other choice”.

As the following examples show, constrainment of the CCP is not merely a theoretical possibility. The US and UK seem to have belatedly caught up with Segal’s proposed foreign policy path.

When Beijing prohibited American airlines to fly to China, the Trump administration responded in kind: Chinese airlines would no longer be able to fly to the US. Playing hardball worked and the CCP immediately reversed its initial decision.

The position of the British government on Hong Kong is another case of constrainment in action. Prime Minister Boris Johnson and Foreign Secretary Dominic Raab have long kept mum on the suppression of Hong Kong’s democracy movement. Yet once China’s rubber-stamp legislature, the National People’s Congress, passed the controversial National Security Law for Hong Kong, the British government took decisive action.

Johnson made a generous offer for a possible 3 million Hongkongers to relocate to the UK should the controversial law come into effect in Hong Kong. Raab also made clear that the government would not sacrifice Hong Kong for a possible trade deal with China.

This UK government policy shift is risky, for two reasons: it has incurred the wrath of the CCP, and mass migration from Hong Kong may not be supported by British voters. But a recent public opinion survey indicated that the British public stood behind Johnson’s decision.

The case of Germany can serve as a warning of what happens when western liberal democracies remain stuck in an outdated China engagement paradigm. Germany’s foreign minister, Heiko Maas, claimed in early June that Germany is too small a country to face up to a new superpower China. Maas also appeared sceptical about the chances of developing a new European China strategy.

The German government remains oblivious to its own considerable power and leverage over the CCP. And yet in its search for a more assertive China policy, the EU is being held back by Germany. It is not without irony that the UK outside the EU could become the European country which will take the lead on taking a tougher stance against China.

For China’s constrainment to work, like-minded countries have to develop a liberal-democratic united front. This means overcoming self-limiting debates about “westlessness” and the decline of the west. Without such an alliance among liberal democracies, the CCP will continue to divide and rule.