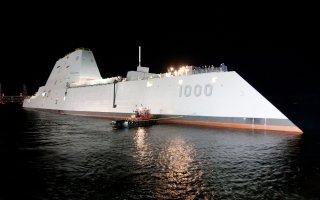 Here's What You Need to Know: The Zumwalt is a heavy hitter whose reach is woefully short.

Let’s get some long-range weaponry out there—pronto. No, the DDG-1000 isn’t a stealth battleship. But it should be. And—suitably armed—it could be.