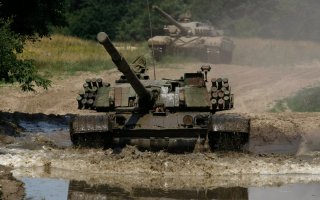 Here's What You Need to Know: Poland is deciding what to do with its Cold War-era tanks.

Image: The Polish tank PT-91, a newer model of the Soviet tank T-72, drives through water at the military base in Bedrusko near Poznan, western Poland, July 9, 2013. REUTERS/Kacper Pempel